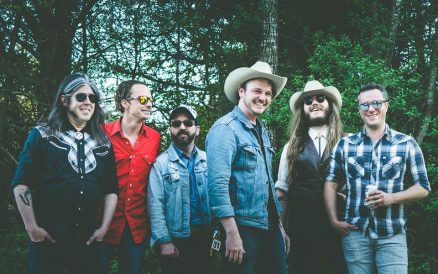 An alt-country band with punk roots, Vandoliers formed in 2015, bringing together a group of Dallas-Fort Worth musicians led by frontman Joshua Fleming.

“I grew up in Texas,” the singer says, “and I wanted to write about why I loved it. I wanted to use myself as a character for my own songs. The Native goes through all our favorite styles of Texas music, and tells my story along the way.”

A tribute to the band’s Texas homeland, The Native takes its listener through a swirl of East Dallas dive bars, Pantego pool halls, small towns, big cities, and the rolling ribbon of bluebonnet-covered highway that stretches throughout the state. Along the way, Fleming sings about getting drunk, getting arrested, and getting it on. Behind him, the band kicks up a storm of Western swing, electric blues, roadhouse rock & roll, Tejano, cowboy country, and twangy punk, saluting everyone from fellow Texans Bob Wills to ZZ Top in the process. There are songs about leaving town. Songs about coming home. Songs about the short-lived romances that spark, burn, and fade in roadside bars, and songs about the lasting relationships that await back at home. It’s a full cycle — a detailed exploration of what it means to truly belong somewhere.

“I was born September 1st in a little town outside Fort Worth,” goes the first line of the album’s kickoff track, “Bluebonnet Highway.” If The Native unfolds like a coming-of-age movie, then “Blue-bonnet Highway” is the opening scene: a fast-moving montage of clips from Fleming’s home, filled with neighborhood girls, traffic lights and the state flowers that bloom every spring. From there, Fleming and company hit the highway with “Rolling Out,” a fiddle-fueled, horn-filled salute to the road, and wax nostalgic with the epic, driving “Endless Summer.” By the album’s end, they’re back in Dallas-Ft. Worth, spilling all the details of their journey to a friend in “Welcome Home.”

For Fleming, the real journey started years ago, when his sister took him to a Bad Religion con-cert. That night left a permanent impression on the young teen, who left the show inspired to make his own music. Years later, he earned his first audience as the frontman of the Phuss, a rowdy punk band that toured nationally. Business was good, but Fleming’s personal life was heading south, with songs like “I Don’t Feel Good” hinting at a troubled mind. After bottoming out, he resurfaced by meeting his future wife, falling in love, swapping his electric guitar for an acoustic, and writing a batch of songs that his country-loving partner might enjoy. Vandoliers were born, with many of those new songs filling the tracklist on the band’s Ameri-Kinda debut.

Recorded in the same studio where Willie Nelson made Red Headed Stranger, The Native was tracked to tape by producer John Pedigo. The album was finished in four days, capturing the spark and spunk of a live band whose tour dates have included shows with the Jayhawks, Old 97’s and Reverend Horton Heat. Released on the heels of Ameri-Kinda, The Native isn’t just a story about where Vandoliers have been. It’s a sign of where they’re going. It’s twang and tattoos, grit and guitars, honky-tonk and horns, Tejano and Telecasters. It’s Vandoliers.