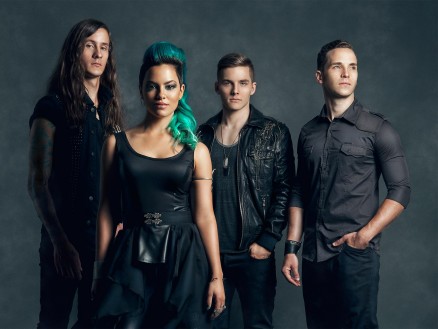 VERIDIA: An expression of truth and to strive for raw honesty in every aspect of daily life. VERIDIA is a young group of artists whose experiences and stories live through their vulnerable lyrics and passionate music.

Deena Jakoub and Brandon Brown, originally from Dallas, found new inspiration in Nashville, where drummer, Kyle Levy, and guitarist, Trevor Hinesley, joined to complete the group. VERIDIA officially formed in 2013. Their unique fusion of alternative rock and electronic elements quickly attracted major label attention. In their short time together, VERIDIA has already played Suburbia, Voodoo Festival and Gulfport music festivals, and opened for Red and Demon Hunter on their recent tour. The band most recently got off of the 2014-2015 Winter Jam tour.

VERIDIA released their debut EP, Inseparable, with Word Entertainment in February 2014. Recorded with producers Ian Eskelin, Matt Bronleewe and Stephen Keech, Inseparable included the #1 hit, “We Are The Brave,” “Disconnected,” and the most recent top 10 single, “Furious Love.” “We Are The Brave” was widely heard during broadcasts of NCAA softball games and the College World Series.