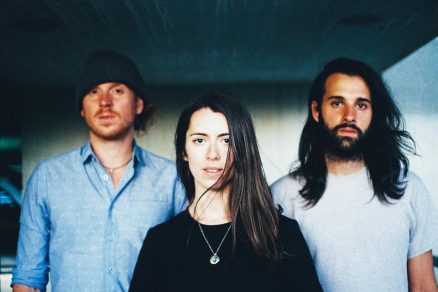 Even in the frenetic metropolis of New York there are moments of still. You have to wait, bide your time until the early hours, but in the short window between closing time and the early-morning commuters you can find a twilight period of pure, nocturnal, solitude.
‘I Go Missing In My Sleep’ – Wilsen’s debut full-length album – was born during these snatched moments. Ensconced in a tiny rented apartment in Brooklyn, Tamsin Wilson would sit, wait for the twilight and then begin moulding her day’s thoughts into fragments of song.
Using a nylon-stringed acoustic to pick out gentle melodies she drew inspiration from this pre-dawn. The calmness and soundlessness. Everyone asleep and inactive. During these moments time slowed and creative threads could be following without interruption; without the fear of someone hearing her mid-process.
What slowly, methodically, took shape was a collection of delicate songs that valued, even cherished, the creative power of stillness.
The finger-picked melodies, dreamy whistles and Tamsin’s whisper of a voice, all of which underpin ‘I Go Missing In My Sleep’, were born during these moments of still, but it wasn’t until bandmates Drew Arndt & Johnny Simon’s involvement that the use of lightness and space was drawn into beautiful contrast with moments of post-rock ambition.
Coming together – alongside producer & friend Ben Baptie – initially in the UK, then upstate New York, before concluding at The Farm Studio in rural Philadelphia, the trio nudged and corralled each delicate wisp of a song, gradually layering it with washes of icy guitar, short staccato drums & Arndt’s restrained basslines.
The band’s previous offerings, 2013’s double-EP ‘Sirens’ & 2014’s EP ‘Magnolia’, had hinted at a creative trio wrestling to balance the folk intimacy of Tamsin’s hushed tones with a more muscular, experimental side. With ‘I Go Missing In My Sleep’ there’s a sense of much more at play than a mere delicate balancing act; this is a rich, dynamic mix that’s coalesced into a singularly musical form that’s pure, confident and unique.
From the opening creep of ‘Centipede’, a shuffling, eerie masterpiece that questions self-honesty, through the multi-layered fan-favourite ‘Garden’, buoyant on a bed of intricate finger-picking & recently surpassing 2.5 million Spotify streams, and onto the climactic ‘Told You’, this is a record of detailed perfection.
Announcing the record in early February with new track ‘Heavy Steps’, Wilsen will slowly begin the process of introducing the outside world to their moments of crystallised calm, before unveiling ‘I Go Missing In My Sleep’ in full in late spring 2017.
Forget the Quiet, things are about to get a little Noisy.