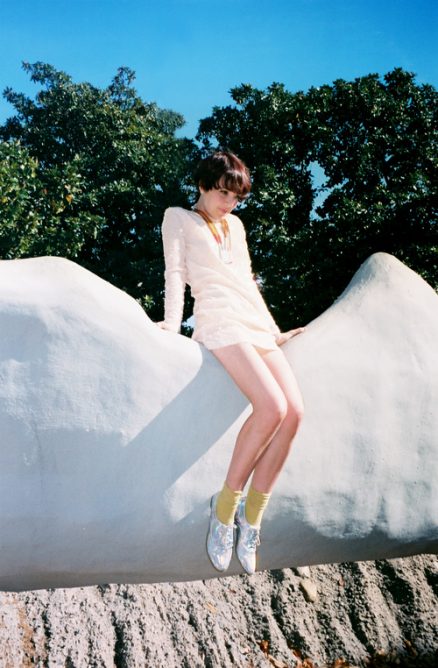 When Nashville by-way-of Chicago, songstress TRISTEN’s debut, Charlatans At The Garden Gate, was released in 2011, SPIN wrote the following: “Tristen is one of the most talented new songwriters in a city full of talented new songwriters. Her addictive debut album is making a splash with its impassioned lyrics and hooky guitar pop that blends country, rockabilly, rock’n’roll, girl group sounds, and introspective balladry — the result of Tristen’s passion for pop music.”

Well, that passion for pop music has evolved even further. TRISTEN’s second LP is called CAVES.

Whilst touring almost non-stop since 2010 and sometimes opening for Justin Townes Earle, Ezra Furman, The Elected and Minus the Bear, TRISTEN started writing songs that would become her new record. The songwriter unveiled CAVES first single, “No One’s Gonna Know” at her Bonnaroo Festival debut, where she was named by Spin and American Songwriter as their pick for “Artist To Watch”. “I was using my Lowry organ and an Alesis HR-16 to work up new songs and on a whim,” she says. “Buddy (Hughen, guitar player extraordinaire), and I quickly incorporated the drum machine into performing as a duo for a tour we were planning with Ezra and a new horizon quickly emerged. I kept saying that I wanted to make a dance record.” In August of 2011, she started working in Nashville, TN with a gathering of ace Nashville musicians and engineers. TRISTEN spent that winter working on the tracks and writing string arrangements in her home studio in east Nashville. “It became that I was aiming to make a hybrid pop record, half machine and half human. I wanted to mix synthesizers and a string quartet, real drummers with my drum machine.” In January she hooked up with Mike Mogis (Bright Eyes, First Aid Kit, M. Ward) at his studio in Omaha, NE to record strings. Final touches, re-visits, and re-workings were then recorded at Nashville’s legendary studio Sound Emporium and Sunset Sound in Los Angeles. CAVES was then sent to the UK to be mixed by an innovator of synth pop music, Stephen Hague (Pet Shop Boys, OMD, Peter Gabriel). Born Tristen Gaspadarek, she grew up on the south side of Chicago in the suburb of Lansing, Illinois, where her musician father instilled in her a love of music. The grandchild of first and second generation immigrants, she was singing from the time she could speak, took up the piano at 8 year old. Inspired by her local Oldies 104.3 and The Beatles, she began writing her own songs. When she was 18 she moved to Chicago, where she studied communication theory at DePaul University until the combination of a broken marriage engagement and her discovery of David Bowie inspired her to move to Nashville to become an artist. Tristen quickly gained attention in Nashville with local press touting her as “a new breed of female songwriter”. In January of 2011 she released her first record Charlatans at the Garden Gate, which won top honors as the Nashville Scene’s #1 Local Release of 2011, and was labeled one of American Songwriters Top 50 Albums of the year. The young musician saw her album met with wide ranging critical praise from a broad range of sources including NPR, Rolling Stone, Paste, KCRW, World Café, Boston Globe, Chicago Tribune.

With her warm, guileless vocals and earnest, evocative songwriting, TRISTEN has emerged as a true individual, bridging genres and emotions to create a distinctive sound all her own with finely honed modern pop, rich with exquisite arrangements and a remarkably intuitive lyrical approach

If you like: Jenny Lewis, Neko Case, Nikki Lane, Lissie