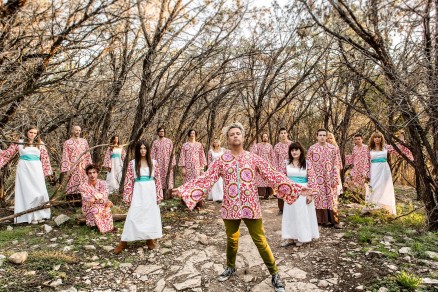 The Trees Are Getting Harder To Climb: 15th Anniversary of The Polyphonic Spree.
The Polyphonic Spree began July 15, 2000 as one man’s desire tohear a sound he dreamt about; before most bands over the last decade, that are often compared in sound and vision to the Spree, were formed. The Polyphonic Spree have traversed the globe several times over much to the dismay of those that thought the band would never leave its hometown of Dallas, TX. They have appeared at every major music festival and late night television program. The Polyphonic Spree has ranged in size from 13 to 27 members. It has never been about the size but about the sound. The band currently has 21 active members.
The Polyphonic Spree have released five full length studio albums up to this point: The Beginning Stages of…, Together We’re Heavy,  The Fragile Army, Holidaydream. And Yes, It’s True. They recently released “Psychphonic” a remix/reimagination album of the complete “Yes, It’s True” full length. Tim DeLaughter has also scored the motion pictures “Thumbsucker” and “Visioneers.” He also wrote and performed the Emmy nominated theme song for the Showtime series “The United States of Tara.” The band will be celebrating its 15th year by performing “The Beginning Stages of…” in its entirety as well as some deep cuts, choice covers, and some other surprises thrown in for good measure. The UK/Europe portion of the tour runs the majority of September. The US/North America leg of the tour is mid October to mid November. Often imitated but never duplicated the psychphonic ensemble The Polyphonic Spree moves forward on its path.
If you like: of Montreal, Clap Your Hands Say Yeah, Animal Collective, Guided By Voices