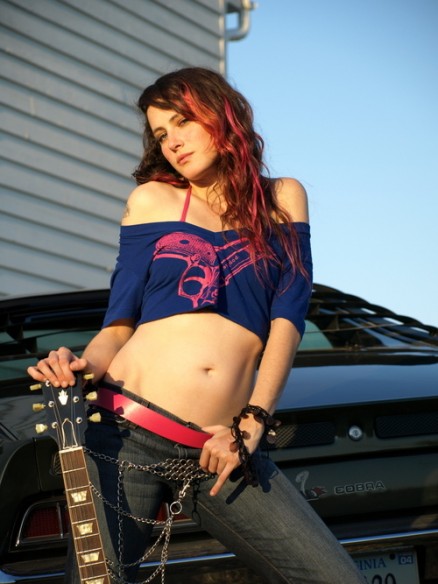 For Hollywood-based rocker The Fabulous Miss Wendy, comparison to iconic female musicians is nothing new. Hollywood’s punk rock princess, The Fabulous Miss Wendy is already “the sexiest rock star ever,” according to Revolver Magazine. Wendy has come a long way since picking up a guitar at the age of ten, and became a virtuoso by the age of 12, inspired by old-school punk acts like the Misfits, The Dead Kennedys, and The Ramones, and driven by her commitment of never taking “no” for an answer, she commandeered fledgling talent, forming and playing in several bands during her scandalous high school years. Her classmates voted her “most likely to be a Rock Star”. How
dead on they were!

“The Fabulous Miss Wendy” continued perseverance through the trenches of the Music Industry is inspired by her own mission to “inspire generations of girls all over the world to follow their dreams, and prove Rock n’ Roll is not only a Man’s World.”

TFMW went on to beat out hundreds of other girls to nab the lead spot in a Nickelodeon all-girl rock band, but thefearless young Rocker opted for the Musicians Institute in Hollywood where she really spread her wings – or at very least sharpened her cute little horns. Her intense energy, powerhouse vocals, and calculated songwriting skills sent her soaring to the head of the class, earning her the opportunity to carry her RN’R message to the American troops stationed overseas in Baghdad, Iraq on 2 musical “tours of duty”. Upon her return, Wendy finished third in the United States’ “World Battle of the Bands Competition” and won a VH-1 Recommended Artist Award.

Wendy also garnered attention from Revolver Magazine and, in turn, earned a spot as one of the ten finalists to become Gibson Guitars’ “SG Gal,” and, as if that’s not enough, her video “I Like Boys” was nominated for LOGO’s “Ultimate Sexiest Videos” weekly contest beside videos by Ciara, Kelly Clarkson, Lady Gaga, the Pussycat Dolls, and more.

Having accomplished incredible milestones by the time she reached the legal drinking age, “The Fabulous Miss Wendy” has an undeniable stage presence that demands your attention, whether you want to give it or not, flailing her axe as though it’s a long-lost limb, delivering an imaginative musical viciousness. Don’t let the cute smile fool you.

Perhaps the biggest honor was when Rock God SLASH surprised audiences nationwide by agreeing ”The Fabulous Miss Wendy” was the perfect artist to join him on tour, giving her the phenomenal opportunity for her to perform for the rabid rock fans across the country, gaining the respect and admiration that only the greatest musicians receive. She also had the opportunity to support with UFO, Green Jello and punk Rock icons Nashville Pussy, after the tour, she herself became the guitarist for Green Jello.
Recently, she teamed up with legendary music producer Kim Fowley (Of Runaways, KISS, and Alice Cooper fame) to produce her third album “No One Can Stop Me”. Her Music Video “Jailbait, was voted #1 by the listeners of Japan’s top radio show.

Wendy is an artist that is the true definition of “The Total Package” and, she will continue to leave her undeniable mark on the Rock world for years to come.