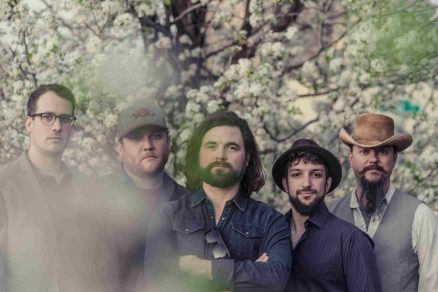 An electrifying force of Americana music…

From their humble inception as an acoustic trio, The Drunken Hearts have grown into an electric five-piece that is captivating audiences across the country. In those few years, the Colorado-based group has managed to make a name for itself in a state that is known for producing and cultivating world-class music. The band fearlessly bottles a tempestuous, yet honest brand of American music — infusing spirited vocals with electric and acoustic instruments, and crafting thoughtful songs that are resonating with crowds everywhere.

Originally an outlet for lead singer and acoustic guitarist, Andrew McConathy, he knew the band needed to expand musically to satisfy his growing songbook of material. With their latest release, Love & Thirst, the band’s journey is clear and truthful, letting the listener in beneath the love and loss that has shaped the band and it’s members. With the track “Want You Back,” their rowdy guitar-riff rock and country influences are showcased, while the title track “Love & Thirst” conveys a more delicate sentiment through both the music and lyrical delivery.

Following the 2016 release of Love & Thirst, the band toured the country from coast-to-coast, with stops at famed venues and festivals, such as Electric Forest, Vertex, Fayetteville Roots Fest, Hangtown Music Festival, and the band’s own YarmonyGrass, among others. Very much in their element on the festival scene, Tyra Sutak (Elevation Outdoors Magazine) described her experience as being “Magnetic. It’s one of the only words my buddy and I could agree on to describe the feeling of the first time we caught Colorado-based band, The Drunken Hearts, live.”