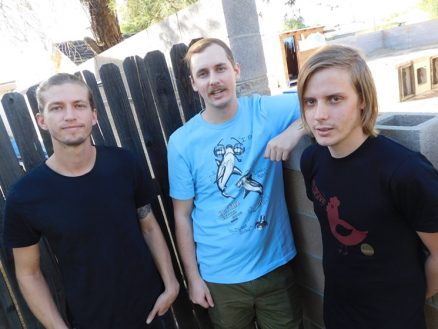 “We’re all in this weird world together” is a perfectly suited mantra to describe Phoenix, Arizona’s Sundressed. The quote, from vocalist and songwriter Trevor Hedges’ description of the message behind his own lyrics, is hopeful and unifying – and thoroughly summarizes the band. Sundressed was initially created, in part, to help vocalist & songwriter Trevor Hedges maintain sobriety. Years later, the calm of a sober life has allowed Hedges to take his struggles and successes and refocus them to a broader scope. What’s truly remarkable is that he’s managed to achieve this without straying away from his signature mixture of self-deprecation and eager determination. What’s left is an uplifting take on the heavier aspects of life, inspiring hope without treading into trite or conceived territory.

The past two years have been monumentally prolific for Sundressed, releasing two EPs and a split with Nashville’s Secret Stuff in rapid succession between April 2015 and July 2016. Now, the five-piece outfit has readied their first full-length record, “A Little Less Put Together.” The LP (OUT NOW!) , full of syrupy, yet poignant pop-punk songs wrought with massive hooks and stark lyrical honesty, is a must-listen for fans of Saves the Day, The Starting Line, & Transit. The uptempo bounciness and complex vocal melodies of “Mill Ave and Broadway” call back to mid-era Relient K, while the melancholy, synth-tinged “A Little Less Put Together” shows the band taking influence from Motion City Soundtrack. Ultimately, “A Little Less Put Together” is a perfect windows-down-on-a-warm-spring-day kind of record – capable of tugging at heart strings, but also demanding singalong after singalong with its huge, addictive choruses.