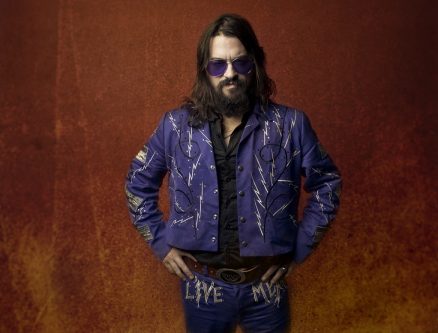 When you hear about the son of two country music legends, the product seems inevitable…

But what you get from Shooter Jennings is a little bit of that, and a whole lot of what you didn’t realize you wanted.

A musician, song writer, producer, and video game creator, Jennings has released eight studio albums, two live records, and has produced and released various projects courtesy of his own record label Black Country Rock. Jennings’ career hasn’t ever stuck to one format, and you can find him all over the map when it comes to where he is at in the game.

His latest album, released in 2016, Countach (For Giorgio), came in at #7 on the US Dance/Electronic charts, and was Jennings’ ode to electronic music innovator and songwriter, Giorgio Moroder. The album features songs with various artists including Marilyn Manson, Brandi Carlile, and Steve Young.

With his 2005 debut solo record, Put The O Back In Country, Jennings enlisted Dave Cobb as producer (who remained producer on his first four solo records) and the album included southern rock tracks “4th Of July” and “Steady At The Wheel”. The record debuted at #22 on the US Country chart.

Fast forward to 2010, and you’ll find Jennings releasing Black Ribbons, a heavy, psychedeliccountry-rock concept album that included narration from Stephen King as the album’s character Will O’ The Wisp. At the time, the album was a left turn for Jennings, but created a new path for fans of all genres, and somewhat of a cult-following of the record. Black Ribbons will be re-released on November 8th, 2016 (Election Day) as an “Ultimate Edition.”

While some stay in the safe-place of their genres, Jennings continues to place himself where he wants to be, and creates exactly what he feels is needed for the time. Music.