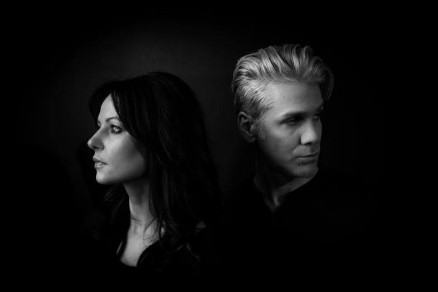 Rivers and Rust is a raw mix of soul, rock and Americana, personified by the duo’s Sheila Marshall and Kyle Cook. Marshall — a bluesy Texas songstress with years of songwriting and road time under her belt — partners with Cook, who rose to fame as the guitarist for the multi-platinum Matchbox Twenty and has gone on to make a name for himself as a singer, songwriter and producer.
Marshall, who grew up in the East Texas town of Nacogdoches, began her career by fronting a rock band while attending Stephen F. Austin State University. That’s when her love of Hank Williams, Willie Nelson and Patsy Cline merged with new-to-her artists such as Led Zeppelin and the Band, giving her voice a bluesier tint and even more soul. Playing the Houston rodeo and other high-profile sporting events built her fan base, and her acoustic EP, Beautiful for Situation, earned her a national Budweiser sponsorship. Then came a stint on the talent show “Nashville Star” — where she became a top 10 finalist — her album Makes Perfect Sense and the Texas-embraced single “Radio.”
Ten years ago, Cook and his family relocated from Orlando, Florida, to Music City, where the Indiana native has flourished as a songwriter, producer and musician. In addition to his duties as a Matchbox Twenty member, Cook has opened the Tennessee Recording Company with longtime friend and collaborator Mike Fiorentino.
Marshall and Cook first met nearly eight years ago, when a mutual friend passed some of Marshall’s songs along to the rocker. “He liked my music, so we ended up meeting in Nashville and we just hit it off,” she recalls. Cook produced her second album, What If I Was, building a friendship and professional respect between the two. In late 2014, the pair decided to mix their voices and styles to become Rivers and Rust. They’re currently working on their first album.