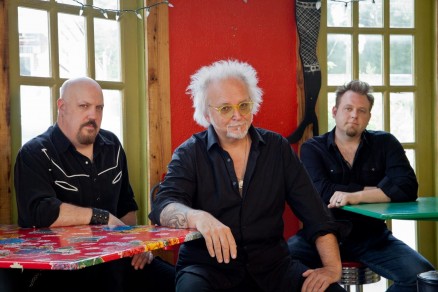 Reeves Gabrels (b.1956) is an American guitarist who in 2012 joined The Cure, one of Britain’s best-known alternative rock bands. The Cure, led by Robert Smith on vocals and guitar, has since headlined major music festivals and performed concerts worldwide — in Europe, England, Ireland, South America, Mexico, Korea, Japan, Canada and the United States — with Gabrels on guitar, Roger O’Donnell on keyboard, Simon Gallup on bass, and Jason Cooper on drums.

Gabrels is also known for his long partnership with British singer David Bowie, with whom he worked regularly as guitarist, bandmate, co-writer and co-producer from 1987 to 1999. And since the early 1980s, Gabrels has independently pursued an active and wide-ranging international music career from bases in Boston, Los Angeles, New York, and London. Since 2006 he has been based in Nashville, Tennessee.

Gabrels was born in Staten Island, New York in June 1956. His mother was a typist and his father worked on tugboats in New York Harbor. Gabrels started playing guitar at age 13, and the following year (1971) his father arranged for lessons with the father’s friend and contemporary Turk Van Lake, who lived in the neighborhood. Van Lake (1918-2002) was a professional musician who had played with Benny Goodman and others.

After high school, Gabrels attended the Parsons School of Design and the School of Visual Arts in New York City but continued to play guitar. In New York, he met noted jazz guitarist John Scofield, from whom he took several lessons. Encouraged by Scofield’s advice and example, Gabrels moved to Boston to attend the Berklee School of Music. He left Berklee in 1981 without a degree, valuing his experience there nonetheless.

During the 1980s and early 1990s Gabrels was a member of Boston bands such as The Dark, Life on Earth, Rubber Rodeo, The Bentmen and Modern Farmer. Modern Farmer (Gabrels, Jamie Rubin, David Hull, and Billy Beard) issued their album “Hard Row to Hoe” on Victory/Universal in 1993.

Gabrels met David Bowie during a Bowie tour in 1987 for which Gabrels’ then-wife, Sara Terry, worked as publicist. Gabrels later (1989-1993) joined forces with Bowie and the Sales brothers (drummer Hunt Sales and bass player Tony Sales) in the rock band Tin Machine. Later, Gabrels became an essential part of Bowie’s nineties sound, most notably on Outside (1995), Earthling (1997), and ‘hours…’ (1999), the latter two of which he co-produced. Gabrels and Bowie also created the soundtrack to the computer game Omikron: The Nomad Soul in 1999 for the game’s French publisher. Gabrels ended his professional association with Bowie in late 1999.

Gabrels is an accomplished composer/songwriter, musical collaborator, and solo performer/producer with varied credits.

He previously worked with Robert Smith and The Cure during the late 1990s, collaborating on The Cure’s track “Wrong Number,” and co-writing “A Sign From God” with Jason Cooper and Robert Smith as COGASM. Further, Smith sang (and co-wrote) the song “Yesterday’s Gone,” which appears on Gabrels’ album Ulysses (Della Notte).

Gabrels and slide guitarist David Tronzo joined forces on a virtuoso instrumental album, “Night in Amnesia,” issued by Rounder in 1995. Gabrels continues to play periodically, as does Tronzo, with Club D’Elf, a jazz-dub-Moroccan group led by Mike Rivard with a diverse roster of musicians and an improvisational approach.

Gabrels has written soundtracks for films including David Sutherland’s “The Farmer’s Wife” (Frontline, 1997) and for PBS productions, and collaborated with Public Enemy on the song “Go Cat Go” for the Spike Lee film “He Got Game” (soundtrack, Def Jam, 1998). He wrote the “club music” portions of the soundtrack for the video game Deus Ex.