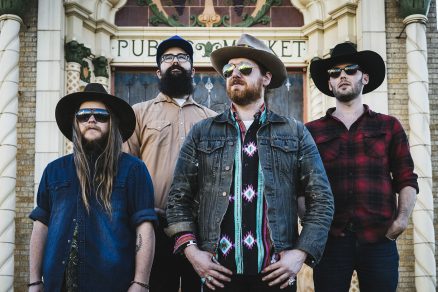 * A $2 minor surcharge will be collected at the door.

“Good evening from Fort Worth, Texas.” Those are the first words of out Sam Anderson and David Matsler’s mouths on ‘El Astronauta,’ The Quaker City Night Hawks’ electrifying debut album for Lightning Rod Records, and it’s the only introduction you’ll need. Over a viscid, bluesy slide-guitar, the band transports you to the sweltering Texas heat, a “land of oilfields, iron nightmares, and fevered dreams.” That song, “Good Evening,” plants the band’s flag firmly in the sand, simultaneously celebrating the pride of home and acknowledging the ominous clouds that hang over it, all while perfectly setting the stage for the raucous journey through time and space that follows.