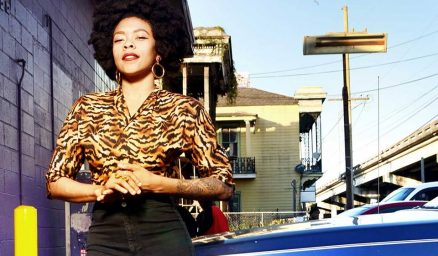 Raised in the church choir and steeped in R&B and garage rock rumble, Nikki Hill is a spitfire with the soul-drenched voice of Etta James and the tattooed, beehived-hair aura of Cramps’ guitarist Poison Ivy. ‘Heavy Hearts, Hard Fists’ is a showcase for Nikki’s unfettered versatility, whether it’s the debauched bluster of “Struttin'”, the Stonesy barn-burning blues of “(Let Me Tell You ‘Bout) LUV”, or the touching soul ballad “Nothin’ With You”.

Just a couple years ago, Nikki Hill was a bartender with an affinity for punk and a deep love for classic R&B. At her husband (and now guitar-player) Matt Hill’s behest, she stepped out from behind the bar and onto the stage. The response has been ecstatic, and now the band tours the globe relentlessly, stunning audiences with their muscular sound, Matt’s volcanic leads, and, of course, Nikki’s inimitable charisma.