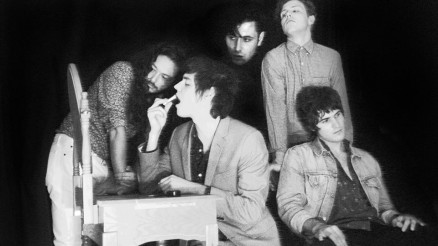 Formed in 2011, Muuy Biien was conceived as a loud, fed-up response to what some would say was a stagnant and uninteresting music scene in the band’s hometown of Athens, GA. Initially the ambient project of lead singer Joshua Evans, Muuy Biien quickly expanded into a full-fledged band. Evans’s hardcore ambitions were fully realized with the addition of guitarists Xander Witt and Robbie Rapp and drummer Jacob Lake.
After just a few performances with a full band, Muuy Biien already established a reputation for their intense live shows. Fans filled the room at house shows as well as established clubs, looking for a chance to be at the front of the mosh pit. At any given show you were likely to see people with bloody noses, beer-soaked clothes and gigantic smiles throughout the crowd. Athens based label, Happy Happy Birthday to Me was among the first to recognize talent in the young band. The label released their debut album, This Is What Your Mind Imagines, to high praise.
After their explosive entry into the Athens music arena, Muuy Biien released two ambient EPs and their sophomore album, D.Y.I. With the recruitment of guitarist/bassist Tobiah Black, the songwriting process became a collaborative effort. Combining darkwave, post-punk and minimalist influences with their speed and intensity, the new material pushed away from the restrictions of hardcore. Self recorded in Black’s basement, D.Y.I. exhibited the band’s newfound focus and confidence.
The release of D.Y.I. gave Muuy Biien national exposure. Vice and MTV were among the publications to sing praises. Following Black’s departure, bass player Parks Miller joined for stateside touring. Playing at CMJ and NXNE, as well as opening for Iceage, Lightning Bolt and the Black Lips – allowed the five piece to thrill bigger crowds.
Although currently unsigned, Muuy Biien has a new album ready for release in 2016. Recorded by acclaimed producer David Barbe at Chase Park Transduction studio, the new record takes the band in a more experimental direction and features contributions from Athens mainstay and E6 member John Fernandes on violin.
It’s clear from the avant-garde nature of their new material that Evans and the rest of Muuy Biien have no interest in being pigeonholed as a typical punk band. Though their sound and style have constantly evolved, Muuy Biien’s spirit and artistic integrity have remained remarkably consistent.