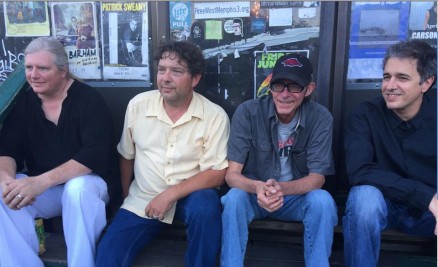 Mojo Depot began some two decades ago when Jason Adams (drums), Tyndall Jackson (guitar and vocals), Rob Moore (vocals and guitar) and John “Johnny-B” Wright (bass and vocals) got together under the name The Loose Change, performing at clubs that included the White Water Tavern. After a few years, the band moved to the Bay Area and then to Los Angeles, where a debut CD, Phantom Train, had its beginnings. A new name emerged, Mojo Depot, and the group traveled and wrote more music, which became the next CD, Crazy to Believe. For a time, the band was a coast-to-coast phenomenon, with Moore living in Berkeley, Calif., and Jackson attending the Berklee College of Music in Boston. Eventually, the two rejoined their Arkansas pals and began recording off-and-on in Arkansas City, where they could work in seclusion, away from the temptations of the big city of Little Rock. Like the “band of brothers” theyconsider themselves, Mojo Depot has opened shows for The Allman Brothers Band, The Neville Brothers and The Cate Brothers. Along with original songs, Mojo Depot performs selected material from The Rolling Stones, The Grateful Dead, The Allman Brothers, Taj Mahal and Robert Earl Keen. Mojo Depot offers a montage of musical styles reflecting a broad range of influences; the result is a great variety of flavorful music producing truly memorable audio and visual experiences. The band is made up of four lifetime colleagues forming an intriguing core group, attracting an ever-changing lineup of special guests while encouraging contributions to the creative process. A liberal approach to live and recorded music promotes and ensures a unique happening, whenever Mojo performs. Mojo Depot delivers over twenty years of collaborative effort evoking one of the tightest and most professional rock & roll shows on the road today. After spending six years in Los Angeles, the band returned to its roots in Little Rock, Arkansas.