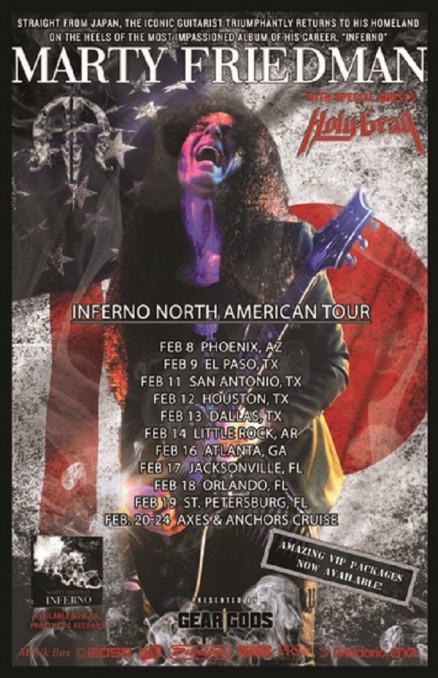 Marty Friedman began his career as a Shrapnel solo recording artist and later recruited a then 17 year old Jason Becker to form the yet unrivaled dual guitar unit, “Cacophony”, who have a strong influence on today’s top guitarists. Amassing worldwide acclaim as a guitar superstar, he came to the attention of Megadeth. Racking up sales of over 10 million records with Megadeth, Friedman continued to record solo records, often embarking on adventurous musical forays far removed from his work with Megadeth, including an album with Golden Globe winner Kitaro.

In a bold move, he left the legendary Megadeth to pursue new musical goals and has succeeded tremendously. Friedman’s many accomplishments make him currently the only musician to be a fixture in the top class of the Japanese domestic as well as international music scene.

Three performance (original songs from “LOUDSPEAKER”, Rachmaninoff and Bach) on national TV with the Tokyo Philharmonic Orchestra, and charting high with his own music and with Japan’s top artists, has spurred Friedman into new celebrity territory.

Now residing in Tokyo, having appeared on well over 600 TV programs Friedman has become a staple on mainstream media in Japan.

His list of accomplishments in Japan is quite long. the short list includes being the first and only foreign musician in history to play the Japanese National Anthem at a major sporting event. (Twice at Formula 1 races)
After writing two bestsellers in Japanese, collaborating with several top Japanese artists, recording #1 singles and several top ten singles, stadium/dome tours of Asia and appearing in two major Japanese motion pictures, he released three albums, “Future Addict” “Tokyo Jukebox” and “Bad D.N.A.” for industry giant Avex. He was in the center of the ad campaign for FANTA for 2 years, where he could be seen in the FANTA band in their television commercials and on billboards all over Japan. He put together a stellar band of Japanese musicians with whom he did 4 solo tours of Europe. His 11th solo album, “Tokyo Jukebox 2” was released on 9/14/2011 by Avex in Japan, and after worldwide reissues of all his previous Japanese solo albums, he released the absolutely incendiary “Inferno” worldwide in 2014. This was his first solo album to hit the Billboard charts in the US (#133 in the Top 200, #10 Rock & Metal and #4 Heatseekers”) and got wide mainstream exposure on Rolling Stone.com,Billboard.com, Grammy.com, Vice.com and hundreds of others. After a successful European tour Marty is back in Japan to play live and prepare for touring the rest of the world to promote “Inferno”.