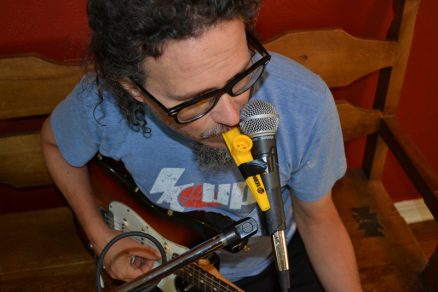 Out of Norman, Oklahoma, witty guitar guru Mike Hosty, plays as a One Man Band playing drums with his feet, playing the guitar and singing at the same time at the Deli in Norman, OK on Campus Corner and entertains as the Hosty Duo with sometimes with the addition of a Drummer combining for a tour schedule of 250 shows a year. Hosty simultaneously tears through gritty slide leads, blows harmonica and or Kazoo and uses foot pedals to stomp bass lines. His guitar collection includes an 8 string instrument that allows him to thump three bass strings with his thumb while he fingerpicks guitar. Whether solo Hosty or Hosty Duo, he has developed a huge underground following of bikers, sorority gals, hippies and truckers.