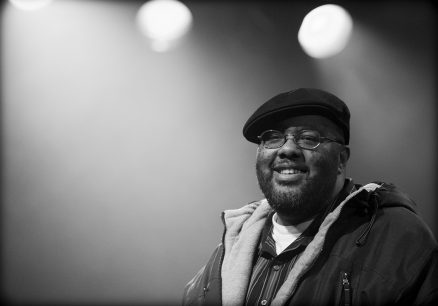 Welcome to the Next Logical Progression. We’ve travelled far with Gift of Gab over the years. When we first heard the venerated Oakland emcee’s voice with Blackalicious, it was a revelation—the opening salvo to nearly two decades of positive emanations, vivid storytelling, elastic rhymes and consistency through reinvention. Across three classic Blackalicious LPs, two praised solo records and 2008′s starstudded collaboration the Mighty Underdogs, not to mention the groundbreaking work of his label Quannum Projects, Gab has been a constant source of innovation and inspiration, giving us as much to mull over as bob our heads to. But lovely as it is, the past is written. The title of Next Logical Progression is no hollow boast: over the lushest beats of his career, Gab blazes a path into the history of hip-hop to come.

While his last two solo records bore interstellar themes, NLP’s aspiration is grounded in earthy familiarity. Look no further than the song “Rise” for the album’s raison d’être, set to plinking piano and upbeat, hornspangled soul. “At an early age, I chose the rapper I wanted to be,” says Gab. “I admired KRS-One and Chuck D because they made me feel like being positive even in a negative environment. That song is about being that type of emcee, but also being human and striving to live up to the things that I’m saying. It’s about trying to be better.” Similarly, the organ-driven bubbler “Dream Warrior” inspires a sense of limitlessness through contrasting tales of characters who couldn’t see beyond the daily grind, while the Stevie Wonder-checking “So Much” is about his sister’s undefeatable spirit while faced with diabetes.

Whether these songs are steeped in the details of depressed America (“Market And 8th”), imagined as playful dialog between Gab and a self-righteous rap up-and-comer (“Wack But Good People”), or a documentary lens aimed at good love gone bad (“Toxic”), each is ultimately about maintaining equity and humanity in those moments that challenge us to abandon ourselves. Of course, sometimes a little abandon is exactly what’s needed, as testified to by NLP’s first single, “Everything is Fine.” Here, with a little help from funk legend George Clinton and Quannum’s own Latyrx, Gab styles hard over nasty bass grooves, synth stabs and snapping drums. “I love making albums,” says Gab. “To me, it’s like making a movie or writing a play, creating a body of work. If you have the ability to do that, why would you ever stop?”

NLP follows that line of thought to, well, the next logical progression. For the first time, Gab had a hand in crafting the music that scores his rap. Instead of going to a traditional beat-maker, he linked up with musician/producer G Koop, a man adept at turning samples into original sounds played fresh on live instruments. But Gab took a different route. “I would take a recorder around and hum bass lines, piano figures and guitar riffs into it, then I’d go over to Koop’s crib and say, ‘Play this.’ I’ve always heard music in my head, but I never knew how to get it out. I finally got to express that.” This, while impressive, shouldn’t come as a surprise. Truly, Gab wouldn’t be the emcee he is if he didn’t embody the message at the heart of Next Logical Progression: Anything is possible; we’ve only just begun.