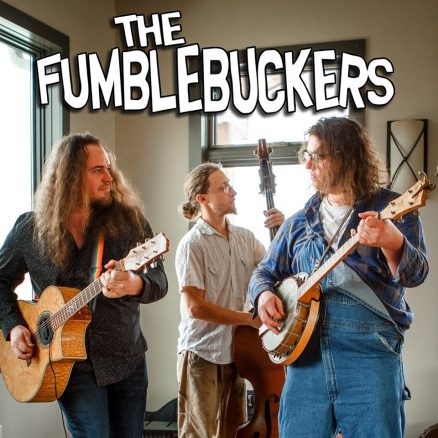 The story of The Fumblebuckers began on a farm deep within the bowels of Macon County TN during a party celebrating the 2016 spring equinox. It all happened as two unsuspecting old friends and bandmates from Kansas, named Colter Keck and Alan Benest, serendipitously crossed paths with Tennessee’s own Charlie South. It was “love at first strum” as they linked up and epic jams were instantly birthed from their instruments. They spent the entire weekend playing together and quickly became aware that something new and wonderful had been born. They had become…The Fumblebuckers.

Now the story continues, as they have spent the last year practically inseparable, crafting their own unique blend of traditional/progressive/indie bluegrass with autobiographical tales of woe, tragedy and longing (as well as a liberal helping of autobiographical laughs thrown in as well). They have been working hard writing, recording, refining their harmonies and becoming The Fumblebuckers that they are today. Primed for the stage and ready to take their music on the road to charm and amuse the masses wherever they can grab an ear. Inviting people the world over to join them as they Fumblebuck their way through Tennessee and beyond with their 11 track self-produced debut album, “Hungover and Layin’ Around” (released June 2017) in hand!