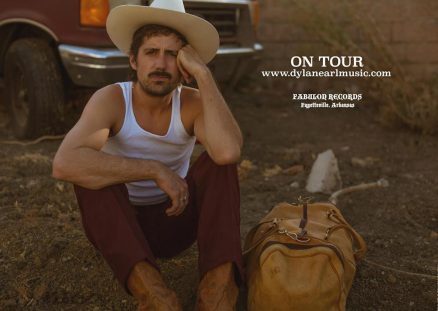 Dylan Earl & The Reasons Why

Dylan Earl was born in Lake Charles, LA and made his way up to Arkansas after being displaced by hurricanes in 2005. Since then, he’s been naturalized by the natural state and prefers the quiet of the Ozarks over the big city music scenes like Austin and Nashville.

Dylan began touring in 2011 with an old band he co-founded called Swampbird. Since launching his solo career in 2014 he’s released “Blessing in Disguise”, a 4-track EP produced by Daniel Romano in Ridgeville, Ontario, and “New Country To Be”, which is his debut effort created, recorded and produced in Arkansas by Will Eubanks and Chris Moore at East Hall Recording in Fayetteville. He and his band, The Reasons Why, have toured tirelessly in front of this debut LP covering the United States coast-to-coast over 5 times including a few appearances in Canada, the UK and parts of western Europe and Scandinavia.

You can often find Dylan and his boys out on the road anywhere between honky-tonks to opera houses to dingy basements. There is no improper place for his music. In fact, the closer he can get to the outer rim of normality the better. He always appreciates hospitality and a warm meal goes farther than most would expect. He prefers sleeping outside, Hamm’s beer, Thin Lizzy, the company of his peers and good attitudes.