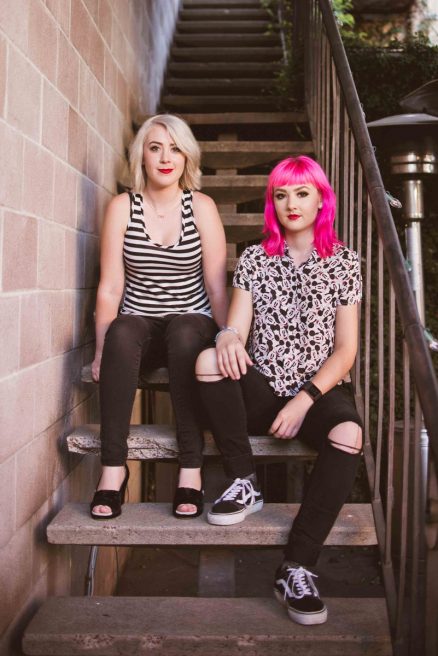 Dog Party! Catchy melodies, tight harmonies, fuzz pedals and big drums; what more could you possibly want
in a rock and roll band? Formed in 2007 by sisters Gwennie and Lucy Giles, the duo draws influence from the classic sounds of the Ramones as well as contemporaries Ty Segall to synthesize their own unique style. Careful listeners will also notice a nod to bands like Cub and Tiger Trap, the former of Sacramento, CA lineage as well.

Adding a recent tour with Swimmers to their tour credentials that already include tour dates in Germany, Switzerland, Austria, Italy, France, and across the Unites States. Dog Party will be hitting the road all summer, including two Southern California Burger Records showcases.

Both play a multitude of instruments, but their live show consists of Lucy on drums and Gwendolyn on guitar with both sisters sharing lead vocal duties. The Dog Party live show owes a debt of influence to old Bikini Kill footage they both have absorbed, and also Sex Bob-omb — that’s right, the fictional band from the cult comic book series Scott Pilgrim vs. the World. They have an uncanny ability to incite nostalgic awe in older audience members, while fueling the fire of frenzied dancing in the younger ones.