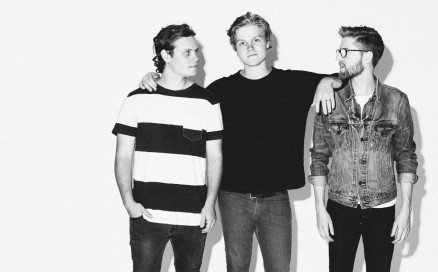 In a relatively brief span of time, Colony House has emerged as a vibrant creative force, as well as a beloved fan favorite with a passionate, fiercely loyal fan base.  That audience is likely to expand substantially with the release of When I Was Younger, the Nashville, TN trio’s first full-length album, whose 14 compelling original tunes fulfill the abundant promise of the band’s three widely-acclaimed, self-released EPs.

Lead singer, guitarist and principal songwriter Caleb Chapman writes effortlessly infectious tunes that resonate with personal experience and emotional authority.  The songs’ messages of faith, hope and perseverance are matched by the organic musical rapport of Caleb and his bandmates, brother Will Chapman on drums and Scott Mills on lead guitar and harmony vocals.

“The songs I write have always come from deep places, whether they’re deep places of joy or deep places of hurt, and it can be hard inviting people into those places with you,” Caleb states.

That openhearted attitude is reflected throughout When I Was Younger, both in Caleb’s expressive vocals and in the band’s vivid performances of such personally-charged tunes as “Silhouettes,” “Second Guessing Games,” “Keep On Keeping On,”  “Waiting for My Time to Come” and “Won’t Give Up,” which exemplify the combination of sharp lyrical insight and indelible melodic craft that makes Colony House special.

As When I Was Younger demonstrates, much of Colony House’s appeal lies in the three bandmates’ powerful rapport, which extends into every aspect of their lives—and which has defined their approach towards the music.

“Our musical and personal chemistry goes hand in hand,” Caleb affirms.  “The three of us are best friends, which means that at any given moment we are each other’s worst enemies as well.  Being in a band is like being in a marriage—it’s a constant reminder of your own pride, and a reminder that you have to be willing to sacrifice in order for it to be successful.  We’ve made a conscious effort to build the foundation of the band on our friendship, and then letting that spill over into our creative relationship.”

As the sons of Contemporary Christian pop superstar Steven Curtis Chapman, Caleb and Will Chapman have been steeped in music for their entire lives.  They began making music together in early childhood, playing with their dad as well as their own combos.  In 2009 they joined forces with Scott Mills, who they’d met through a cousin.  Although initially known collectively as Caleb, the trio rechristened themselves Colony House in 2013, borrowing the name of an apartment complex in their hometown of Franklin, where Will and Scott as well as Caleb’s future wife had all lived prior to the band’s formation.

The new combo quickly began to win attention, bringing its charismatic live shows to fans via diligent touring, while earning critical raves with a series of acclaimed EPs:Colony House, Trouble and To the Ends of the World.  Along the way, the band members found time to pursue other musical adventures, with Caleb collaborating with Will’s wife, singer Jillian Edwards, as the In-Laws, and Will moonlighting playing drums on tour with noted indie combo Ivan and Alyosha.

But Colony House remains the focus of their musical lives, as When I Was Youngermakes clear.  “We labored on the album for a long time,” Caleb notes.  “We began recording it in September 2012 and finished it in July 2013.  We had our dear friends Joe Causey and Ben Shive co-produce it, which made it a very special experience.  They knew that this was our first full-length project, and I think that they felt the responsibility to help us tell our story the right way.

“Creating this record had such a strong set of contrasting emotions: joy, hope, frustration, sorrow, uncertainty, confidence,” he continues.

“These songs are questions that I have been wrestling with for months, sometimes years,” Caleb asserts.  “They’re stories I had been trying to write in the dim light of my 100-square-foot room long before they were ever brought to life in a studio.  We created the album conceptually, trying to keep in mind the rules of telling a story.  There must be a dramatic arc, a beginning, a middle and an end. So in that way, every song is a piece of the equation.  The front half of the album is a bit more lighthearted and fun, and then the back half gets a bit heavier.  And the last third, starting with ‘Won’t Give Up,’ is very important to us.”

Perhaps the most startling aspect of When I Was Younger is the band’s forthrightness in addressing some deeply personal, emotionally raw issues, most notably the accidental death of Caleb and Will’s 5-year-old adoptive sister Maria Sue in 2008.  That tragedy is addressed on several of the album’s songs, including “Keep On Keeping On” and “Won’t Give Up,” underlining the songs’ recurring themes of faith and family.

“It has been a difficult thing to do, sharing your family tragedy when telling your story or singing your songs,” Caleb states.  “But I think that it’s important to tell.  Everyone has a story of pain, of heartbreak, of a letdown or failure, and that is a thread that ties us all together—the ones on stage and the ones in the crowd.  We were dealt a painful hand, but it’s what has bound us together so tightly.  We want to create honest art, and this is the most important thing that has happened in our lives, so it would be a hard thing to leave out of our story.”

That heart-on-sleeve honesty is just one of the qualities that make Colony House a special band, and make When I Was Younger such a remarkable musical statement.

“We believe that we have a story to tell—a story of hope and perseverance—and that’s what we want to leave people with,” Caleb concludes.  “We are not in the business of writing tragedies.  We have experienced tragedy, but we’ve also seen hope triumph.  Our faith is woven throughout everything we do musically, just as it’s woven into the foundation of our lives.”