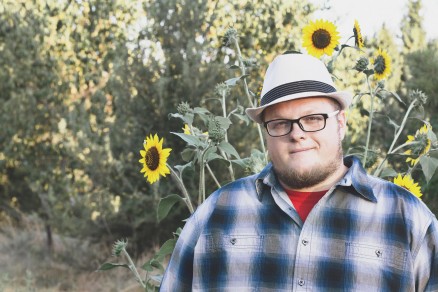 Occasionally, blessings come disguised as roadblocks. “Sometimes it’s hard to see the lesson in the suffering. I pray for grace to guide me,” Cas Haley sings on “Hold Up My Heart,” a track from his new album, More Music More Family.
From the outside, the soulful musician looks like he has it all: A loving young family, a wonder- ful home near Paris, Texas, where he grew up, and a career on the rise. He’s shared stages with UB40, Allen Stone, G. Love, Ziggy Marley, and Easy Star All-Stars, among others, and has per- formed at events such as Hangout Music Festival, California Roots Music and Arts Festival, Reggae on the River, and Mighty Sounds in the Czech Republic. But a freak accident — a fall while skiing at a festival in the Midwest — left Haley unable to sing. During eight months of treatment, he had plenty of time to think about what the injury meant to his future. The idea for More Music More Family came from reflecting on how to pursue his career more holistically.
“To be alone is an unnatural thing / even when you’re spreading good vibes with the songs you love to sing,” the musician reveals on the title track of his album. Spending months at a time on the road, he was missing his children as they grew up: “In pursuit of this dream, I was creating tension,” he says.
Haley channeled that turmoil into an album’s worth of material. More Music More Family, which will be released through Jimmy Buffett’s label, Mailboat Records, deals with realizing purpose, strength and values. Crowdfunded through a Pledge Music campaign and recorded over a month at Steelgrass Farm in Kauai, Hawaii, the making of the record was as much about the healing process as the creative process. For starters, Haley points out, Hawaii is paradise. If you’re hav- ing issues in paradise, they suddenly become very clear.
Those challenges — and the overcoming of them — are felt on More Music More Family, but songs like the blues-tinged and funky “I Got You” and the danceable, kinetic “Spirit Being” ad- dress the universality of life lessons with positivity, uplifting melodies and Haley’s heartfelt vo- cal style. “Big Hope,” a track whose reggae-flavored intro gives way to energetic hip-hop beats, features Freewill (Luminaries) and Drew Misik (New Reb). Singer/songwriter Trevor Hall guests on “Hold Up My Heart,” up-and-coming Hawaiian artist Mike Love lends an Aloha spirit to the second verse of the title track, and Andrew Terrett, aka Tubby Love, is featured on “Whole.”
Tubby Love co-produced More Music More Family, co-writing about 90 percent of the songs with Haley. Their different writing styles — Haley uses a lot of artistic license and relies on emo- tion and delivery to tell the story; Tubby Love aims for clarity of message and precise lyrics — melded to powerful effect. The album borrows the best of Haley’s previous efforts. Connection, from 2010, was recorded in a controlled studio setting while 2012’s La Si Dah was captured in full takes with no overdubs. On More Music More Family, Haley and his team wanted to bridge those two worlds, capturing an organic feeling along with a high fidelity.
While the album nods frequently to reggae sounds and textures, Haley — who grew up with mu- sician parents and their extensive record collection — doesn’t consider himself a reggae artist. His omnivorous listening habits and involvement in the skateboard culture of the early ’90s led him to the ska artists who influence him to this day. But More Music More Family is eclectic: “Man Inside” weaves introspective and honest lyrics through shimmying rhythms and a low-key refrain. Instrumental track “Ryan’s Prayer” is a cool swirl of melody and propulsive beat, and “Before It’s Too Late,” soul-tinged and syncopated, builds a platform from which Haley’s vocal can soar. The gospel break down in that song’s last minute raises the energy even higher with its celebratory stomps, claps and huge-hearted magnetism.
Now recovered and back to making music, Haley’s new approach incorporates his family into shorter tours. He’s also making sure the places he plays are aligned with his family-friendly ap- proach. “I’m trying to make everything more in line with the message so that I can be received in the way that makes the best impact,” he says
That message has everything to do with the importance of the unit, which includes blood rela- tives as well as close friends. Even as people pursue their dreams and careers, Haley hopes they won’t lose sight of togetherness. “Slow down and be aware of the blessing of family,” he says. “That’s where the light comes from.”