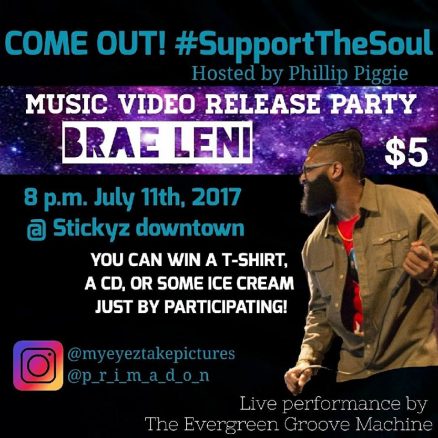 Having fun and keeping it soulful are words that best describe neo-soul artist Brae Leni. Born in Little Rock, Arkansas Brae began his craft at a young age. Brae began experimenting with music and performing just at the age of five. Brae would dress up as Michael Jackson and he even became involved in the choir. Throughout middle school and high school, Brae was in the Church Choir and he was also in the choir at his school. Brae began taking his music career seriously at the age of 18. Brae’s sound is neo-soul with hip-hop and R&B. Brae now has a completed 2 mixtapes via datpiff and 2 EP’s on iTunes. LoveBomb and Soulsville are currently available on iTunes, Google play, & Amazon. Check youtube or soundcloud to hear single releases & videos done by Brae Leni if you’d like to hear more. Different from other artists because of his creativity and vision. Brae wants to establish one church in every state’s capital (totaling at 50 churches). Of course that is not Brae’s only goal, he wants the world to be aware of his craft and go on to win a few Grammys! “You should love what you’re doing because it comes from the soul, not for the money.” Brae’s advice to others is, “Get to know Jesus and have fun in life. While you’re having be cautious and careful.”