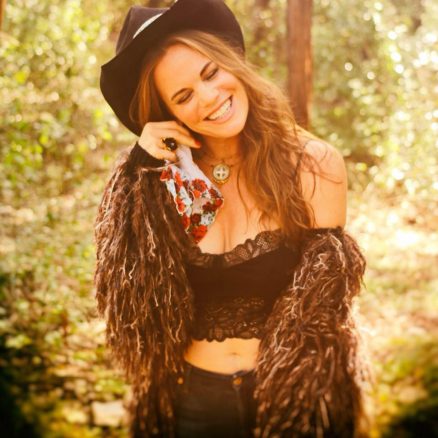 “The fact that this album is done is nothing short of a miracle,” says the radiant 5’10 brunette with her 1,000-watt smile. “Ain’t Who I Was” is the result of me letting go of the dream that I’d built my whole life around: Music.

“I was at a show at 3rd & Lindsley one night two weeks before my 35th birthday. I’d been on the road making music for thirteen years and I was still barely scraping by. I had no agent, no manager, and no prospects. The stress of all those years of doing it on my own had started to take its toll and I felt an overwhelming sense of defeat. Then something just snapped. I felt like I was losing my mind. I ended up in the hospital that night after suffering from what the doctor said was a panic attack. He recommended I take some time off, so I went home, packed up my apartment and my cat and drove home to Texas the very next day.

“There is an emptiness that comes from being on the road all those years – from sacrificing all meaningful relationships in pursuit of the ‘dream.’ I realized I had become severely depressed because I had put so much pressure on myself to succeed. That’s when I knew I had to let go of all of it, but I had no identity apart from Bonnie Bishop the struggling artist. If I let go of my love of music, what would I become? That was the scary part. Not knowing where my life was going.”

Like saying goodbye to an old friend, Bishop (37) cut ties with music — even selling her touring van and all of her merchandise — and passionately focused on writing and storytelling, marking an end to a career that had kept her on the road for more than a decade.

She was determined to let go of music and she did for the next 18 months. She stopped writing songs and found that writing stories was a way to channel her emotions. On a whim, she applied to Sewanee’s prestigious MFA Creative Writing program at Sewanee University of the South and much to her surprise was accepted. That’s where she was, in graduate school pursuing her new career in story-writing, when she got a call from Grammy-winning producer Dave Cobb.
“I had spent a year-and-a-half killing my dream so when Dave Cobb said he wanted to make a record on me I was terrified. But I’d never had an opportunity to work with someone of his caliber, so I said ‘yes,’ in spite of my fears.”

‘Ain’t Who I Was’ is her most transparent album to date. Armed with songs from her years-deep catalog, she approached the recording process with the innocence, hope and trepidation of a new artist, but with Dave Cobb at her side.
“You can hear Bonnie’s soul and heart in every note she sings,” says Cobb. “That’s what attracted me to Bonnie; the honesty and humility in her songwriting.”

“Making music again felt different because I was no longer defined by it,” says Bonnie. “I didn’t have the pressure of needing to ‘succeed’ in order to feel good about myself as a person. For the first time, music was fun and I have Dave Cobb to credit for that.”

Bishop’s songs have also been performed by TV star Connie Britton on ABC’s prime-time show “Nashville,” and she recently celebrated a second Bonnie Raitt cut. The slide guitar legend recorded “Undone” for her 20th career album ‘Dig In Deep,’ which hit stores in February.
“I love her work,” Raitt says of Bishop, with whom she shares a first name and a rootsy swagger. “She has a beautiful soul, artistry, honesty and courage. Bonnie is as gifted a prose writer as she is a musician, not to mention she’s an incredible singer.”