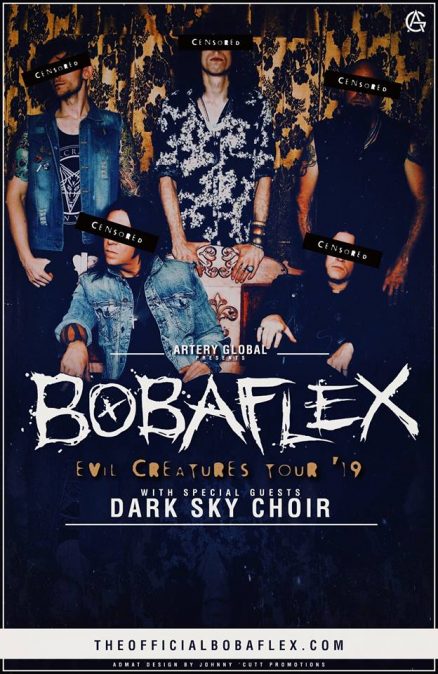 Born out of the ashes of record label bankruptcy and the loss of the rights to their name, Bobaflex found themselves lost at sea when they started their own label BFX Records for the release their first independent full album Hell In My Heart in 2011. The album spawned two charting singles and set the mold for Bobaflex’s fiercely independent way of life.

Since Hell In My Heart Bobaflex has begun to solidify themselves as the model for independence. They have released two further independent albums under their BFX label (Charlatan’s Web – 2013 and Anything That Moves – 2015). These two resulted in another 2 charting singles and multiple self produced music videos with one million or more views. Bobaflex has just released Eloquent Demons on the label Thermal Entertainment, their most ambitious and well received LP yet, which has already produced four acclaimed singles – a cover of Hey You by Pink Floyd, the original Long Time Coming, Lights Out and Off With Your Head.

Bobaflex’s tireless ethos has also carried into their live shows and touring schedule. Having played all lower 48 states over the last 7 years, they have played 100+ shows every year including a record setting 154 in 2016 and 123 in 2017. This constant schedule has crafted the band into one of the tightest and realest live Rock ‘n’ Roll bands in the country.