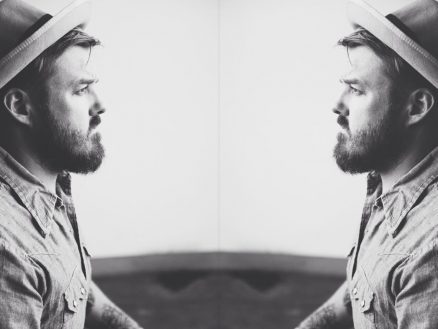 Look out your window.

Whether you’re in a Manhattan hi-rise or at a truck stop somewhere off a Midwestern interstate, keep your eyes open. Bart Crow is coming your way.

Always known as “the nice guy” with a smile on his face, the tides are turning and the gloves are coming off. Bart Crow is still the kind of guy and artist fans in the South and Midwest have grown to love. But on his new album The Parade, boundaries disappear and things are getting real.

The road-toughened troubadour and his band have already logged thousands of miles playing 130+ dates a year in front of loyal rowdy crowds at far-flung, late-night clubs and concert halls all over Texas, Oklahoma, Kansas, Arkansas, Nebraska and beyond. It’s his music that draws them — a tangle of roots in blues, country and down-home rock ‘n’ roll, branded with his unique imprint. They hear their lives in his lyrics, written in the tradition of Townes Van Zandt, Steve Earle and other true-life troubadours.

With no help from big-time labels, and money pulled from his own pockets, Crow has put together an admirable track record as a recording artist, having lofted six No. 1 singles onto the Texas Music Chart – one of which, “Wear My Ring,” sold over 165,000 copies. He has sold over 40,000 albums, released five self-produced albums in just over a decade, including Dandelion, which debuted at No. 1 on Billboard‘s Heatseekers South Central chart. He’s been cheered in Country Weekly, on CMT and in other national media outlets. His YouTube videos and concert footage have drawn more than 2.5 million views.

He’s chiseled his foothold in the edifice of Americana through hard work, talent, determination and a deep love for making music and building the best life he can for his wife Brooke and three kids, Townes and twins River and Parsons.

Yet in the end, Bart Crow is what you get: a blue-collar balladeer with his own unique message.

It comes across loud and clear on his newest set of passionate songs and performances, The Parade. Released in partnership with Thirty Tigers, it spotlights an artist whose story will feel familiar to all Americans who know what it means to survive in challenging times.

“I can relate to blue-collar folks everywhere because I don’t know any difference between them and me,” he insists. “My uncle is a fireman who works on a ranch on his days off. My other uncle is a fireman. My brother works as a construction superintendent. I’ve worked construction too. I’ve stained decks and built fences in 110-degree weather. My father grew up white-trash broke, a ninth-grade dropout. He eventually became a self-made multi-millionaire with his own commercial drywall corporation, but we didn’t have luxury growing up.”

Another uncle stoked Crow’s imagination about living a wanderer’s life. “He was a professional rodeo cowboy,” he recalls. “I used to think that was the most amazing thing on the planet. He’d come home from two or three weeks on the road and tell stories about being in Cheyenne and then somewhere else the last night. Even more than music, this idea of the nomadic lifestyle was very romantic to me.”

This perspective is central to The Parade, with the added element of Crow’s experiences. He grew up in tiny Maypearl, Texas, made his first attempts to write songs while in the United States Army and geared up to his current regimen as a performer on weekends while studying at Tarleton State University in Stephenville, TX. Perhaps the most significant milestone in his past involved moving with his future wife Brooke to Austin, where they worked together to get him started as an artist.

“I guess we just don’t know any different way to live than with me gone for six or eight months a year. After a decade-plus, this is just who we are. This is what we do. Besides,” he adds, with a laugh, “it’s probably the foundation of our marriage that my knucklehead ass is gone a lot.”

Like the border that divides his hometown from dreams of what lies beyond in his song “City Limits Signs,” Crow’s boundaries are dissolving. Wedding plainspoken poetry to powerful hooks and grooves, The Parade transforms daily occurrences into stories with universal resonance.

Not everyone has spent months far from home as Crow documents with irony on “Free Like Me,” dreamy loneliness on “Vapor Trails” and truth telling love affair with music on “Dear Music,” where he finds himself in “another where-the-hell-am-I town.”

Fewer still have weathered years on the honky-tonk circuit while staying faithful to their dream, a struggle Crow recounts on “Top of Rock Bottom.” (“I won’t be laying down on that Florida-Georgia Line,” he sings, with what he insists is respect and empathy.)

Still, whether you’ve fought to keep your own business alive or adapt to a soul-grinding cubicle gig, you’ll get the message. And if you’ve been burned or saved by love, you’ll see yourself in the deft imagery of “Queen of the Heartache Parade,” the sweet pain of “One Night with You,” the worldly-wise “Here We Go Again” and the insights that weave throughout “Life Comes at You Fast.”

New listeners may go beyond enjoying The Parade to identify with Crow as someone who knows first-hand the challenges of balancing one’s dreams, integrity, responsibilities and reality.

“It’s pretty damn scary when you’re raising a family off of touring and it becomes time to cut a new album, which means investing up to $70,000 of my own money,” he admits. “My 4-year-old, Townes, starts preschool in August. Our 17-month-old twins, River and Parsons, are blowing through diapers left and right. And I’ve got to take money that could be going to their college funds, more money than I have in my personal checking account, sit down at the crap table of life, roll the dice and hope that someone falls in love with the 11 or 12 songs we picked.”

That’s why Crow’s dream at this point involves more than spreading appreciation for his music from coast to coast. “I want to go to Seattle and Spokane and all the West and East Coast spots and the South, to DC and Manhattan and Connecticut. and have people show up and sing along with us,” he insists. “I want to hear people all over America come up to me and say, ‘Hey, we got married to your song!’ I’m like, ‘Have you been on iTunes? Do you know how many frigging songs are on there — and you chose mine?’ I don’t take that lightly.”

No, more even than that, he wants what everyone who discovers his music wants as well. “I’d love to go to bed at night and not fear for what’s going to happen next month or next year. I used to say, when we bought our tour bus, we were one backstroke away from being dead in the water. It would be nice to earn that through selling tickets and playing in so many of these beautiful cities I’d love to see.”

That dream is within reach now, because Crow’s story is your story too. All you need to do is listen — and join The Parade.