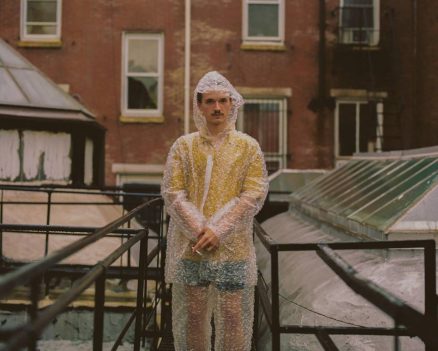 “Manic” is the only word Arthur gives to describe his mindset going into recording his debut album, Woof Woof. An isolated year and a half spent in the woods of Delaware County, Pennsylvania, allowed Arthur to channel that manic energy into nothing but his most ambitious project yet, creating his own world “inhabited by a religion of my own making, like I was in a cloud, or hell, or something. Searching for charity and my own vision of morality.”

Gradyville, PA, where the album was recorded felt like being trapped in time, trapped out of time maybe. The recordings of phone calls and voice messages show a thin connection to the “real” happenings happening separately from his recording studio/parents’ house, little portholes that gave Arthur a disjointed but needed view into what was going on outside of the constructed world of his recording process.

Sometimes it is hard to give others a view into the micro-realities we create for ourselves while working on the things we love, but Woof Woof is an example of the slits in time and space that can transport the consumer directly into the mindset of the creator.

This idea of a “place out of time” seems to follow Arthur, creating little bubbles of weird and eerie truth that exist for only the people experiencing it then and there, but with this album he has created a physical representation of this skill, shedding the ephemeral nature of what it used to be. Now you can carry a transporter to the liminal world of Arthur with you at all times.