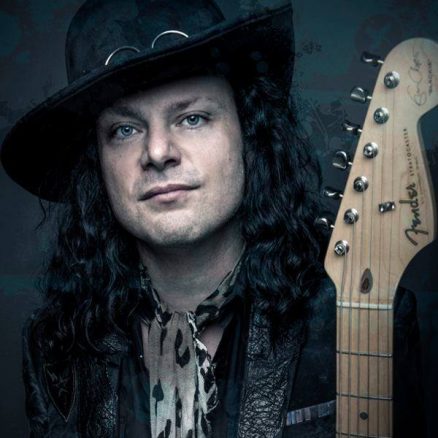 “A very talented guitarist… and where did that voice come from?” – B.B. King

Anthony Gomes, #1 Billboard Blues Artist, is a triple threat force as a guitarist, vocalist and songwriter. Blues Revue Magazine recently declared that, “Gomes’ formidable guitar chops and authentic singing place him in the forefront of modern blues.” This, along with his high-energy shows and dynamic stage presence, make him one of the top draws on the Rock/Blues circuit today. Gomes has headlined concerts in 17 countries and has had the honor of sharing the stage with B.B. King, Buddy Guy, Robert Plant, Joe Bonamassa, Heart, Jonny Lang and Kenny Wayne Shepherd.

Word of Gomes’ electrifying performances has reached Eric Clapton, Morgan Freeman, John Goodman, Toby Keith, Jonny Lang, Ron White and Vince Vaughn who have all attended Gomes’ concerts. After experiencing Gomes live, John Goodman referred to him as “a pure soul brother” and comedian Ron White declared his official endorsement of Anthony Gomes. Perhaps the greatest complement was offered by Morgan Freeman who jokingly professed that Anthony was, “not bad for a white boy.”

In addition to performing, Gomes is an award winning blues history scholar, earning the University of Toronto’s C.P. Stacey Award for the highest overall academic grade point average by a history major. Anthony completed his master’s degree thesis on the racial and cultural evolution of blues music, graduating with high distinction.

Believing that music can inspire the human spirit, Anthony founded the Music Is The Medicine Foundation in 2010. This non-profit organization is dedicated to changing the lives of others through the healing power of music. Through private donations and winning sizable grants from State Farm Insurance and CVS Pharmacy, the foundation has funded songwriting scholarships, offered music education programs, and donated musical instruments to those in need.

Born in Toronto, Canada to a Portuguese father and a French-Canadian mother, Gomes began playing guitar in his early teens and was drawn to the blues sounds of B.B. King, Buddy Guy, Eric Clapton and Jimi Hendrix.

He relocated to Chicago in the late ’90s to learn from the blues masters. During his brief stint as a sideman for Magic Slim and the Teardrops, Gomes put together his own group and won the first annual Buddy Guy’s Legends “Best Unsigned Blues Band” competition in 1998. Later that year, Gomes released his debut CD, Blues in Technicolor, which introduced him as a guitar-slinger loaded with impressive firepower.

On 2002’s Unity, he accomplished the album’s title with a heavy mix of styles leading Bandit Blues Radio to name it one of the “Top 30 Essential Blues CDs” of all time. Gomes was elevated to the top of the blues field just one year later when BluesWax Magazine named him “Artist of the Year,” an award he would claim for several years in a row due to his endless commitment and touring. Music Is the Medicine (2006) peaked at number four on the Billboard Top Blues Albums chart, only to be outdone by LIVE (2008) debuting at number one. In 2012, Gomes received critical acclaim for his release of Up 2 Zero. The album was named the “Best Blues CD of 2012” by A1 Blues.com and the Blues Underground Network voted the album “Best Blues Rock CD of 2012.” The accolades continued in 2013 with the release of Gomes’ gusty acoustic album …Before The Beginning. Blues 411 honored the release with the “Jimi Award” for best Blues/Rock CD of 2013 and it continues to make many “Best Albums of the Year” lists.

Gomes shows no signs of slowing down. 2015 will see the release of Electric Field Holler, a guitar driven blues infused rock ‘n’ roll album that showcases Gomes‘ blistering six string work and whiskey soaked voice. “I feel like this will be our pinnacle year in terms of creativity and artistic achievement,” says Gomes, “it’s time to turn it up.”