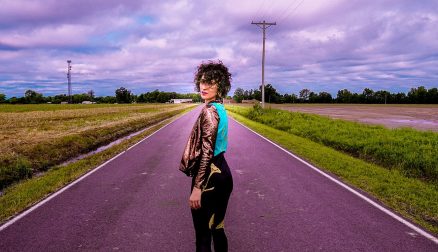 On her first full length album, Patterns, Whoa Dakota (Jesse Ott) spins a web of lush indie pop, graceful melodies and ardent lyrics. Building on 2015’s debut EP, I’m a Liar, the Nashville-based artist expands the sonic landscape on her new LP to an amalgam of electropop and R&B. Rife with raw lyrical honesty and enchanting textures, Whoa Dakota’s sophomore effort, August 17, 2018, is destined to captivate listeners everywhere.
Patterns bounces from 80s-influenced-pop reminiscent of HAIM to indie folk ala Jenny Lewis while artfully maintaining consistency. The debut single “Patterns” serves as a thesis for the entire album: a brazen examination of “self” that grapples with toxic cycles and emotional accountability through layers of pop melodies and powerhouse vocals. The record is as much about self-discovery as it is about creation of self.
Patterns’ title track is dripping in bright bells and glittery guitar, evokes early Madonna and 90s Mariah Carey. While the jaunty pace of the track will make you want to dance around your room, the lyrics and those of it’s album counterparts, are destined to make you mourn for the people that you used to be, as well as the one’s you’re holding yourself back from becoming.
Born in Little Rock, AR to a state champion bull rider and a wild child mother, Ott was raised part time on a cattle farm, and part time in the city. The dichotomy of her upbringing is apparent in her sound. The songs range from rocket-soaring electro pop, to stripped down acoustic moments.
The importance of roots and how they shape us is woven throughout her music and visuals. In the prelude to “Toe to Toe,” Ott listens to the story of how her Nanny, Hattie Jo, finally made the decision to leave her alcoholic husband, emphasizing that our patterns of remaining in toxic relationships can sometimes be learned, but so can the power we uncover when we make the difficult decision to leave them behind.
A touching moment of empowerment on the album comes on “The Blue Light – Reprise” in which all of Ott’s favorite women recite a note her aunt wrote to her late grandmother, Nanny (whom Ott shares a special bond with). “It gets to the point where you can’t distinguish who’s saying what because this part for me represents the strength available in sisterhood. No matter what our story is and we’re coming from, we’re always stronger together. Sisterhood is going to save us. On an individual and a global level.”
The album’s transitions flesh out Whoa Dakota’s identity arc by paying tribute to her family and chronicling her journey to empowerment. She pulls from the words of family members, herself and those of Jean Shinoda Bolen, whose Goddesses in Everywoman breaks down female archetypes correlating personality traits to Greek goddesses. “When you can identify the personalities in your own head, you can decide who gets a seat at the table and who doesn’t,” says Ott.