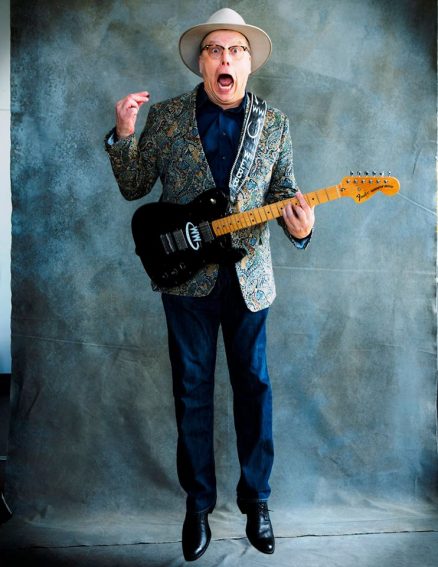 Webb Wilder & The Beatnecks have been cranking out their own kind of Southern Rock and “ROLL” for the USA and the world since 1985. The band’s energy and intensity is well exemplified by the heretofore unreleased, vintage tracks contained on POWERFUL STUFF!, its latest recording for Landslide Records. A potent mixture of roots rock, Americana, blues, and British influences, the album primarily features the “original” Beatnecks: Wilder on lead vocals and guitar, Donny “The Twangler” Roberts, guitar and vocals, Denny “Cletus” Blakely, bass and vocals, and Jimmy Lester, drums, who were one of the most popular touring bands from the mid-1980s into the 1990s. POWERFUL STUFF! presents timeless live and studio tracks, many of which were produced by R.S. “Bobby” Field, a founding member of The Beatnecks, split equally between original songs and distinctive cover renditions, all of which inexplicably escaped release back in the day.

“As our song ‘Lost In The Shuffle’ suggests, that’s kind of what happened to these tapes,” said Wilder, who is excited to finally see them available to his “loving public.” “All the tunes from this new, old stock were performed throughout those early years, and consequently the band was tight and in top form when we recorded. Our sound came out of a variety of influential genres, and all of them are represented here.” Compiled and remixed (where possible) by Wilder and George “the Tone Chaperone” Bradfute at his Tone Chapparral studio in Madison, TN, the new album was culled from dozens of recordings that had been carefully stored in a Nashville facility for over 30 years.

The title track, “Powerful Stuff,” written by Field, was a Beatnecks’ original that unfortunately stayed in the can after The Fabulous Thunderbirds picked it up and made it one of their biggest hits that landed a spot on the soundtrack of the 1988 motion picture, COCKTAIL, a box office winner. “Make That Move,” a long forgotten blast from Britain’s Levi and the Rockats, kicks off the album in breakneck fashion, followed by “New Day,” a somewhat timely composition by Webb and Terry Anderson (Woods, Yayhoos). POWERFUL STUFF! moves along at a crisp pace showing the band’s ability to shift effortlessly from disparate material such as Sam and Dave’s “Ain’t That A Lot Of Love” (accompanied by a full blown horn section), Lightnin’ Hopkins’ “I’m Wild About You Baby,” Steve Forbert’s “Catbird Seat,” a spirited take of Johnny Paycheck’s “Revenooer Man” and even a raucous cover of Little Richard’s “Lucille,” that echoes Jerry Lee Lewis at his finest.

A native of Hattiesburg, Mississippi, Wilder moved to Austin, Texas in 1976 with his friend since junior high, Bobby Field, who would later co- found the Beatnecks with him as well as write many memorable songs and produce several earlier records. After moving to Nashville, Wilder and Field formed the Beatnecks in 1985. As Nashville moved toward unapologetically commercial fare, Wilder and Field were busy crafting their signature brand of rock ‘n’ roll, founded on classic influences from both sides of the pond. The band’s debut, IT CAME FROM NASHVILLE, a brazenly rocking bar-band rave-up (also available from Landslide) was recently named by PASTE Magazine as one of the 50 Best Southern Rock Albums of All Time. Wilder’s subsequent releases, HYBRID VIGOR, DOO DAD, TOWN & COUNTRY, ACRES OF SUEDE, ABOUT TIME, BORN TO BE WILDER (live) and MORE LIKE ME, have continually maintained the high standard set initially, becoming textbooks for aspiring roots rockers and showing there was (and is) a vibrant market for their hybrid brand of rootsy musical gumbo. In its review of Wilder’s most recent release, MISSISSIPPI MODERNE, GUITAR PLAYER Magazine called Webb “a national treasure.”

Music critics have always warmed up to the Webb Wilder juggernaut. The Associated Press described the band’s music and stage performance as “a glorious amalgamation of grunge chords, killer grooves, Screamin’ Jay Hawkins theatrics, a healthy sense of humor, and great pop melodies.” It’s “full of wit and personality, and devoid of technological or conceptual gimmickry,” added the Houston Post.

The same formula powers POWERFUL STUFF!, an exciting blend of bedrock American music incorporating a host of styles. Not forgotten is Wilder’s ever present irreverent attitude and wit. According to Gibson Guitar magazine, this “gives Wilder’s music a sense of fun and imagination often lacking among his peers.” POWERFUL STUFF! is proof as to why this now legendary group has remained a blistering live attraction since it’s 1985 beginning. Once again, it comes from Nashville, and it brings a world of swampadelic, Wilderized wisdom, bluster, and mayhem, all showing off the group at its very finest.

Webb Wilder is an evangelist for real Rock ‘n’ Roll. As a singer, guitarist, bandleader, film actor, songwriter and humorist, he may be roots-rock’s only true Renaissance man. POWERFUL STUFF! will no doubt find favor with Webb’s devoted legion of fans, but its affecting songs and masterful performances are sure to bring many newcomers into the fold. In listening one can hear a marvelous encapsulation of things right and righteous, wistful yet wild, strange at times but always strong. Garage rock and bluster blues. Fuzz-tone and fury, and, in many ways, a full and unbroken circle back to the days when Webb Wilder was a Mississippi boy “possessed of the mind of a full-grown man,” listening to first Elvis and Rick Nelson, then Beatles, Byrds, Stones, Kinks, Animals, Buffalo Springfield, Faces, Badfinger, The Move, Free, The Band, B.B. King and so many others.