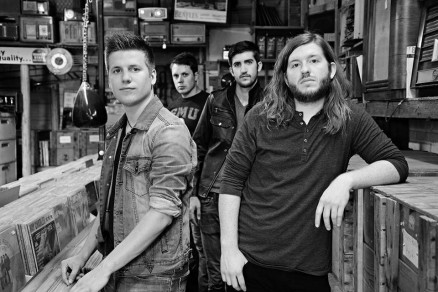 Tyler and the Tribe

He’s one of those “Good ol’ Boys” that likes to Rock ‘n’ Roll! That’s what people could say about every member of the Tribe. From counties that have a higher population of cows than people, members Heath Robinson, Jordan Owens, Tyler Jones and Colton Joe Smith lived the slow sizzle of life in the country growing up. “You learn that throwing rocks at signs with a couple of buddies can be fun and sitting on a tailgate at night talking with a friend can’t be beat,” says Jones. Or in the case of Tyler and the Tribe, sitting in a studio late at night. This fantastic foursome found themselves recording on a project deep into East Texas nights at Jones’ house soon after they met. After becoming friends, the rest is history and history looks a lot like good music.

The 2012 release “Rock On” took months to record but the band found it’s chemistry in the process. “For Heath and I, the chemistry was there. We’ve been in lots of bands and projects together so everything is just very natural.” Owens says of his friend. Robinson claims, “It took a few jam-sessions to learn where everybody wanted to go as a whole.” The album speaks for itself though and shows that the band definitely found it’s groove. Late night recording sessions turned into late night show rehearsals as the guys quickly hit the road to play live all across multiple states in the region.

Fast forward less than thirteen months and the guys have re-entered the studio with a dozen new songs. “It spans the boundaries of rock all the way to country music and everything in between.” Says Smith. World-class producer CJ Eiriksson led the month-long charge of capturing the Tribe’s electric vibes between the band’s touring schedule. Smith continues, “We want people to feel love from this album. We want it to be a positive influence everyday for our fans.”

The band still enjoys coming off of the road to the country life to unwind from time to time. Back to the place where they learned hard work can pay off. The place where good people become friends. The place that Tyler and the Tribe was “BORN”.