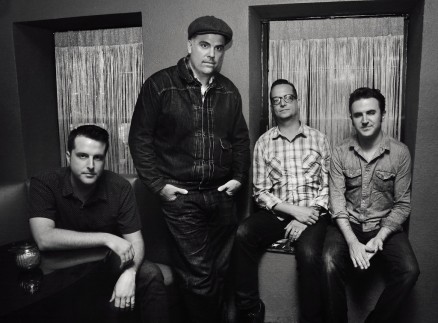 From their adopted, boom-town home of Austin, TX, The Bellfuries are constantly within earshot of the latest catchphrase. New brands are always within their peripheral view.
Well and good, vocalist and chief songwriter Joey Simeone says. “But we’re a rock and roll band. People are obsessed with categories, sub-genres. We check into a hotel, and the guy or girl behind the desk asks what kind of music we play. ‘Rock and roll.’ Then they ask what I mean by that. Well…

“…Let’s see. There’s elements of country music, rhythm and blues. There’s some improvisation on stage that I guess you could say is jazz-inspired. Throw in some gospel…plenty of melodies coming out of older pop tunes. That adds up to rock and roll, last time I checked. If we’re not re-inventing the wheel, I’d rather get to work than worry about renaming it.”

Simeone takes a no-nonsense, workingman’s line, and “Workingman’s Bellfuries,” (Hi-Style, Aug. 18) holds that line firm. No doubt, the armchair taxonomist will find plenty of variety. Lead track and single “Loving Arms,” is foot-stomping rockabilly-pop, a la Hamburg-era John Lennon. “Bad Seed Sown” brings finger-popping jive from the Dion school. “Make the Mystery No More” is Phil Spector 2.0, with some Everly Brothers harmony sitting at the top. And “Why Do You Haunt Me” is a shimmering track that suggests nothing so much as Elvis Presley’s operatic pop approach of the 1960s.

“Again, what does this add up to?” Joey asks. “Rock and roll. When I sit down to write a song, sure, sometimes there’s a frame of reference. But I don’t think it’s a necessarily good idea to set out to write something that sounds like Motown here, something like Chuck Berry there, as a general practice. If you’ve got a strong melody and lyrics that mean something to you, the song is going to work, even if you’re playing with just a guitar in the corner of the bar.

“If you get a good beat underneath that, you know what direction the production is going to take, it basically dictates itself.”

Production can be a make-or-break proposition creatively, even with a winning batch of material. The Bellfuries needn’t have worried in this case–Jimmy Sutton, proprietor of Hi-Style Records (and studio), and longtime collaborator with the sensational JD McPherson, was on board.

“He’d been making noise awhile about doing something, and I guess I eventually called his bluff,” laughs Joey. “We were driving back and forth between Austin and Chicago, where the studio is based, in a mini-van. Mostly winter months. Workingman’s conditions all right.”

“Given that we didn’t have millions of dollars to throw around, time was limited and the sessions were long. I brought a set of songs that were basically finished–or so I thought. But we turned them inside out, tried them with all kinds of different rhythm feels. That’s Jimmy’s #1 strength, and it’s hugely important: the rhythm section pulse. If the band isn’t grooving, to some extent even on the softer stuff, the song just deflates. It’s somehow easy for a lot of people to miss, especially for a singer-songwriter like me, who is busy trying to remember my Shakespeare or whatever. Our drummer Chris Sensat was pretty new to the band, but he brought so much to the table, and Shecky Seaver (bass) was right there with him.

Says Mike Molnar, lead guitar: “Again, once you got a beat you’re excited about, you know where you’re going. And sure, we got into all kinds of talk about different records we liked or remembered..maybe one or two late-night parties listening to all the great old rock and roll that inspired us in the first place.”

Looking back on The Bellfuries discography, there’s plenty to choose from. The debut release “Just Plain Lonesome” is considered a modern classic by hard-core rockabilly audiences around the world. A handful of cover songs–learned from Webb Pierce, Dion, and Sam Cooke–tell much about their listening habits at the time. Style, however, need not become a creative straitjacket. “Your Love (All That I’m Missin’)” was a decidedly fresh addition to the classic country canon. Ask JD McPherson (or “Workingman’s” producer Sutton), who recorded the song for his “Signs and Signifiers” debut.

The follow-up “Palmyra” was a surprise departure for many fans. Comprised of folk-ish rock and pop songs, with jangling guitars prominent, it highlights a transition that still confuses some members of the press (not to mention the audience).

“I have a ‘if it ain’t broke, fix it’ attitude in some respects,” Joey chuckles. “It didn’t seem strange at all to experiment with the kind of sounds that REM, The Smiths, etc. had made. I don’t know if some people realize that those bands were into virtually all the same early records we are.” Mike: “I see all this stuff coming out of a tradition, personally. It’s surprising to me that some people don’t feel that way, but again, we’re back at the whole branding issue. We’re just not interested.”

So Joey, is “Workingman’s Bellfuries” the culmination of all this restless creativity? “You could say that. ‘Loving Arms,’ on record, reminds me of early rockabilly in some ways, but I’d call the actual song pretty modern. Mike has a part in there you can barely hear, and it’s the kind of thing only The Smiths would have thought to do.

“Hell, the title is a nod to The Grateful Dead. That may seem left-field to some fans, but I don’t see much difference–two bands motivated mainly by a desire to tour, play rock and roll for groovy people. That’s almost a far-fetched concept now, with music not, uh, high on the list of things people are willing to pay for. This is what I do, so I just put my head down, and go to it.

As a final aside, Mike adds: “If all goes well, the next album will be called ‘Looking After Our Portfolio’ or ‘Living Off Royalty Payment Bellfuries.’”