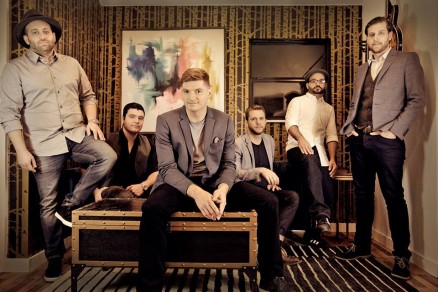 When Donovan Keith moved to Austin in 2008 to form Soul Track Mind, he couldn’t read music or play an instrument, and he’d never fronted a band. In fact, he’d never even sung in one. But within a few months after he met self-taught guitarist Jonathon Zemek, Soul Track Mind had a regular Wednesday-night gig at an East Austin speakeasy, where they quickly earned a following while honing their energized mix of R&B, funk, pop, rock and blues. Eighteen months later, Soul Track Mind released their first album, Ghost of Soul, and earned mention in a New York Times magazine story about soul music’s revival.

Accolades continued as they built audiences in 20 states (with airplay internationally) and recorded in the same Muscle Shoals, Ala., studio as their heroes had. Earl Thomas, the blues/soul singer who encouraged Keith to pursue his dream after hearing some vocal tracks Keith had sent him, also encouraged the band to stretch beyond their original retro-soul foundation to find their own groove. Their self-titled second album moved in that direction — and drew praise from the Huffington Post, which enthused, “Soul Track Mind’s performances are not just stylish [horn] solos and blurry guitar riffs; they are a cultural exclamation point about American music.”

Says Keith, “We pride ourselves on being honest, genuine and heartfelt. I don’t write or sing songs about subjects I don’t know anything about. Our connection to music is spiritual and more about the audience experience than it is about us.”
In 2014, the six-piece band sought out Austin-based producer CJ Eiriksson (U2, Matchbox 20) to helm Unbreakable, a manifesto of sorts about following your heart and believing in yourself no matter what the odds. The Austin Chronicle called the album “a hot, horn-fed, electric guitar-etched platter of hard-modern R&B.”
But every smart band matures and evolves, and Soul Track Mind is graduating from old-school to a sound that’s truly their own — an of-the-moment mélange of pop, rock and R&B that’s both sophisticated and accessible. Keith’s honey-sweet voice and energized stage presence — drawn from his acting background and swing-dancing hobby — still electrifies audiences and draws them to dance floors, but the music the band is creating now has a sharper edge and focus. When producer Boo Mitchell, son of famed Al Green producer and Royal Studios founder Willie Mitchell, heard them perform as finalists for the 2014 Louisiana Music Prize — which they won — he loved that sound so much, he offered them recording time at the legendary Memphis spot.

That’s just one of the many proud moments they’ve experienced; others include playing the 2015 Texas Governor’s Inaugural Ball; sharing bills with Enrique Iglesias, David Crosby, Erykah Badu and other top talents; and headlining the Viva Big Bend Festival in Alpine, Texas. With new singles including “Generation Song,” and more recording at Royal Studios (where Bruno Mars and Mark Ronson laid down the Grammy-winning “Uptown Funk”), Austin’s groovers are keeping their minds on the present — and making tracks designed to become tomorrow’s classics.