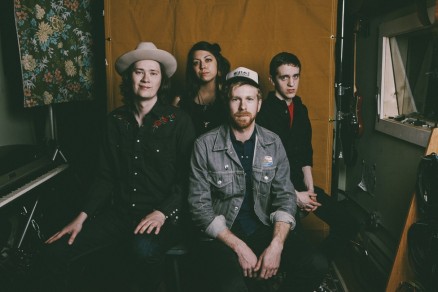 After a series of national tours, TURCHI released Live in Lafayette in early 2013, and exploded on the blues-rock scene, notably earning high praise from Living Blues Magazine (“for all of their communion with the past, TURCHI sounds vital, alive, and essential”), landing on the cover of Buscadero (Italy) and being showcased in a five-page feature in Il Blues Magazine (Italy). At that point, TURCHI’s national touring grew to include Europe, highlighted with a headlining spot at Mojo Festival (Rome) in June 2014 after the release of Can’t Bury Your Past, which expanded the trio with keyboards/organ (Anthony Farrell) and saxophone (Art Edmaiston).

Also in 2014, stemming from his tours in Italy, Reed began collaborating with renowned Italian guitarist Adriano Viterbini, leading to Scrapyard, an intimate, intense, guitar duo album recorded in Memphis and in Rome. Called “a marvelous example of talent and simplicity” (Bluebird Reviews, UK), the album earned a editor’s feature from iTunes (“blues chemistry overflowing with earthy delta slide and dark pulsing electric guitar”), and a spot on Tidal’s “editor’s playlist.”

At around the same time, seeking new inspirations and sounds, Reed moved from Western North Carolina to Memphis, where he began digging into the trademark rhythms and styles that made the music from Stax and Muscle Shoals groove so powerful. It was a time of personal and musical change, leading Reed to disband TURCHI with the release of sendoff EP We Spoke in Song, recorded at an old JC Penney in Richmond VA amidst their final performances in October 2014.

As they toured in support of Scrapyard in Europe and the US, Adriano introduced Reed to Tuareg music (Tinariwen, Bombino, Terakaft). Back in Memphis, Reed wrote songs with a new sound and band in mind, and began recording at Ardent Studios in April 2015. The result, Speaking in Shadows, will be released March 4th 2016 on Devil Down Records.

Revealing musical and songwriting influences ranging from Randy Newman and JJ Cale to Beck, T Rex, and Tinariwen, Reed steps out from behind the gruff fuzz into a multi-faceted sound built on finely crafted songs and ear- & rear-moving grooves. Featuring an all-star group of musicians including drummer/bassist Paul Taylor, saxophonist Art Edmaiston, Andrew Trube and Anthony Farrell (Greyhounds), and Adriano Viterbini, Speaking in Shadows is built on a foundation of Memphis groove and fat-back rhythm. Fresh textures abound, from the carnival of sounds on tongue-in-cheek “Drawn and Quartered” to the heartbreaking vocals of Heather Moulder on the spare, haunting lead track “Pass Me Over.” As a songwriter, Turchi confidently mines the classic blues/rock vein in “Offamymind” (“Well I can barely walk, so I guess I oughta/ Get behind this wheel and drive”), effortlessly shifts gears to the satirical “Everybody’s Waiting (for the end to come),” and turns introspective in “Looking Up Past Midnight.” Reuniting with engineer Adam Hill (Big Star, Dirty Streets, White Stripes), Reed strikes out for new territory with co-production by Billy Bennett (MGMT, Drive-By Truckers, Los Colognes). The album was mastered by Andrija Tokic (Alabama Shakes, Natural Child, The Whigs) at Bombshelter Studios in East Nashville, with artwork and design from Charles Ritchie.