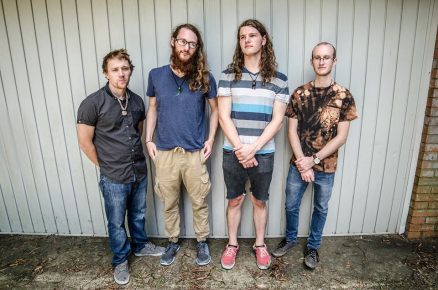 Aligning elements of funk, jazz, rock , jam-band and progressive metal, into what fans have dubbed “Groove-Fusion”, Central Arkansas based unit MotherFunkShip abducts their audience with intergalactic vibrations.
Within the first few months of inception, MotherFunkShip attained a robust and loyal following with their authentic sound and high-energy live performances. On March 31st MFS released their first EP entitled “To The Moon”. The release party packed the house at ZaZa’s and the energy was electric! “To The Moon’ is now available on iTunes, Spotify, Google Play, and many others.
In fall of 2014 Vocal/Guitarist, Dakoda Tanksley, met then Drummer, Derek Weiand while attending University of Central Arkansas. Sharing a love of jazz, rock and jam-band, the two immediately found a musical connection and began playing together regularly. This musical friendship blossomed into the preliminary makings of MFS. After a year of playing with various instrumentations, the two brought onboard Drummer, Brandon Short, whose background in Metal and Funk gave the group a rhythmic driving force. Derek then took on the role of Keyboardist; adding cosmic synth sounds to channel his electronica influences. A few months later Bass/Vocalist, Blake Bost, joined to complete the group; complementing the sound with his aggressive bass lines and songwriting abilities. MFS is known for their uncanny ability to captivate audiences with a showcase of raw talent, musicality and high energy performances. With a sound unique to the region, MotherFunkShip is guaranteed to quench your thirsty ears with a tall glass of funky refreshment.