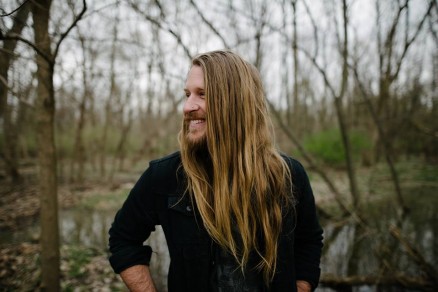 Everyone knows that people go to Florida to die, but fewer people know that there are people who get born there too. Caught between the dualistic disenchanting scenes of Buffet cover bands and high school hardcore, a young Joshua Powell transplanted to the Midwest in pursuit of education and new art.
Now a loudening voice in the Indiana independent music community, Powell has carved out a niche in his new home by setting his hyper-literate lyrics to broad swaths of psych-folk and shedding the vocal affectations of a varied past.

The Great Train Robbery was born in Anderson, IN and named for a 1903 Western. The band serves as a revolving door of collaborating musicians to underscore Powell’s evolving craft and has independently released two EPs and two full-lengths since their inception in 2011. In the wake of the Appalachian-tinged folk record Man Is Born for Trouble, Joshua departed on a Kerouacian gypsy spree, touring back and forth across the country, playing six nights a week, and living in an old minivan. When he eventually returned to the Indiana town that molded his art, he laid down fibrous roots and refocused his energies into becoming a regional staple. Here, he began funneling his collected experiences into his most ambitious record yet, the newly-released Alyosha: a psychedelically-tinged electric folk album, spiritually informed by classic Russian literature and pressed to vinyl. Evoking comparisons to Sufjan Stevens and Neil Young, No Depression described Powell’s sound as “lushly-composed chamber folk…revival-in-the-river folk mysticism.”

As Powell and his transiently shifting backing band have extrapolated this sound, they have played over 400 shows, opened for such national acts as Mike Mains & the Branches, Seabird, and The Soil & the Sun, and played festivals like Indy Folk Fest (IN), Starry Night (IN,) Midpoint Music Fest (OH), and Lincoln Calling (NE). When Powell’s not sweet-talking the interstate, he can be found at the local dive bar reading Hesse or Brautigan and scribbling potential poems.