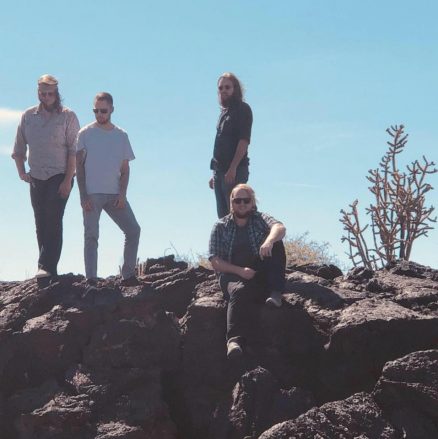 Armed with a sound that mixes the rootsy stomp of the Southern states with the trippy swoon of the West Coast, Folk Family Revival make music for rock clubs and rodeos, dive bars and honky-tonks, or campfires and cantinas. A throwback to a time when Southern rock and psychedelic music dominated the airwaves, they may be best described as a psychedelic folk-
country rock and roll band, but they’re not wild about labeling their sound. They’d rather let the music do the talking.

Water Walker, the band’s newest release (due out on April 7, 2015), includes 12 songs that were weaned and whittled on the road, where the Texas-based band of brothers — featuring Mason, Barrett and Lincoln Lankford, along with family friend Caleb Pace — built up their audience one gig at a time.

After releasing their debut album in 2011, the guys hit the Texas circuit hard, opening shows for legends like Willie Nelson, Merle Haggard, and Wanda Jackson. At times called a country band, the young group used the label as motivation to push their boundaries and develop a diverse yet distinctive set. Soon their sound was reflective of a variety of genres. Some nights they’d have a blues rock feel and others an Americana or folk vibe. This wide-ranging experimentation and push to progress helped fuel Water Walker.

“I’m a huge Dylan fan,” says Mason Lankford, “and I’ve noticed from his live recordings that a song never sounds the same way twice. We’ve always been really into that idea, even as we’ve grown. We want the song to sound different than it did last week. We’ve been changing our songs every day for the last five years, and once we get into the studio, we’ll think about which version worked best and we’ll record it that way.”

When it came time to record Water Walker, Folk Family Revival decided to team up again with Jeffrey Armstreet, the same producer who helped them kick off their career with 2011’s Unfolding. The pace inside the studio was mostly laid-back. Whenever the guys were in Magnolia — the band’s Texas hometown — they were usually working with Armstreet, slowly piecing together a collection of poetic songs ranging in topics from politics, faith, power, love, and the modern world. They’d start by tracking the songs live, capturing the groove and spontaneity of their live shows. Sure, it was work… but it was also a good hang.

If there’s anyone who knows the value of a good hang, it’s the guys in Folk Family Revival. Over the years, a community of musicians who’ve passed through the Magnolia area and spent time at the band’s house have come to be known as “The Family.” Also the case with new friends or fans, the ever expanding “Family” can be explained by the camaraderie that occurs when folks relate to the charitable spirit of the band or their infectious sound. You get the sense that these guys just enjoy good company and good tunes… and they seem to be a magnet for both.

“We can all do more if there’s more people working together,” says Mason. “We’ve met a lot of people since we released Unfolding, and that’s one of the reasons Water Walker sounds so different. We’re better players, better communicators, better friends. We’ve also learned to relax. When we did Unfolding, our producer and friends used to say we were kids who sounded like old souls. Always wanting to try new things and be willing to change, we started getting in touch with our youthful side. We’re still serious and obviously a little more mature… but there’s
a looseness to the new record that wasn’t there before.”