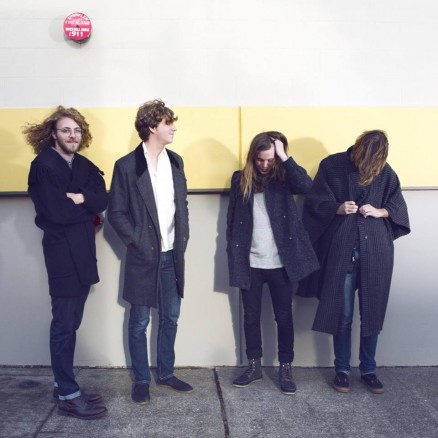 The name Desert Noises—like many of the band’s songs on their debut full-length 27 Ways—came out of a dream that popped into front-man Kyle Henderson’s head while sleeping. “I just woke up and wrote it down on a piece of paper,” says the 24-year-old, who used it for the band he’d first formed with his brother and a friend in the Provo/Orem, Utah, area, after leaving his promising job as a business analyst for a multi-million-dollar skin care company, and a wife, behind.

Joined by fellow twenty-something cohorts in bassist Tyler Osmond (yes, those Osmonds), guitar-shredder Patrick Boyer and drummer Brennan Allen, the foursome set out in a van three years ago and haven’t stopped since. 27 Ways is being released on L.A-based indie label SQE Music.

Recorded in the magical Sonic Ranch Studios in El Paso, Texas, on the banks of the Rio Grande with producer Nick Jodoin [Black Rebel Motorcycle Club], the album turns those experiences into songs which detail 27 Ways of breaking away from Mormon family and friends to undergo their own mission—touring in a rock ‘n’ roll band.

“We’ve distanced ourselves from the religion,” explains Henderson, “but not the people, nor the community. That’s basically our families and everyone we know.”

Ironically, considering the band’s name, the album opens with the sound of waves crashing on the ocean, incorporating influences in beat-oriented soul and R&B as well as classic psychedelic rock (Led Zeppelin is a big touchstone), often in the same song. Check out the choppy rhythms in the opener, “Grandma Looks,” which shares a name with Tyler’s Tumblr blog, morphing into a lilting Grateful Dead jam. There are also nods to Mumford & Sons-style folk in the marital strife of “Mice in the Kitchen,” as well as acoustic delta blues in Boyer’s slide guitar stylings on the album- (and often live set-) closing gospel plaint, “Dime in My Pocket.” The album sports a pair of set-piece anthems in “Keys on the Table” and the wide-screen “Angels,” with its telling lyric, “I feel the weight of the world in change.” Brendan Allen’s tribal percussion plays a huge role in “Follow You Out,” Osmond’s undulating bass underlines the burning sexual desire of “Shiver,” while Boyer’s rumbling guitars and a big bottom characterize “Run Through the Woods.” With its grinding, acid-rock feel, “Elephant’s Bed” channels both the current (Aussie band Tame Impala) and the past (Neil Young’s Buffalo Springfield stint), with “What the World Made,” a song about hitting rock-bottom, sporting a loping, country-rock vibe not that far removed from Tom Petty and the Heartbreakers.

Henderson, whose mom was a piano teacher, didn’t pick up the guitar until he was a high school senior, but he soon made up for lost time, taking off from listening to Zeppelin, Modest Mouse and Bob Dylan to writing and playing his own songs.

“Older music is all we really listen to,” says Henderson. “Those melodies are so simple, but profound, soulful and timeless. And that’s what our music aspires to…to never get old.”

Osmond, who had been performing with his famous family since the age of two, got his first bass at 12, explains that the songs for the new album were all written and road-tested live while the band was on tour.

“This is what we always wanted to do,” Tyler explains. “Find four other dudes willing to work as hard as one another toward the same goal. That’s rare in and of itself, especially when you have to sit in a van together 12 hours a day. But we’re all brothers now.”

“I don’t know how we found each other,” says Henderson of his fellow bandmates. “We knew each other from playing around the area, and then it kind of got out of control from there. We didn’t really choose to be in this band. The band chose us.”

Indeed, there’s a sense of fate and destiny in Desert Noises that comes across in the band’s commitment to keep the flame burning.

“We don’t think too much about the future,” says Henderson about the group’s long-range goals. “You don’t want to disappoint yourself by setting goals you can’t achieve. I think it’s better to just let it flow and take its course.”

The constant roadwork, including high-visibility gigs at the Austin City Limits Festival and LouFest in St.Louis, have led the band to learn more about the outside world, and at the same time appreciate where they came from.

“It gave us great faith in humanity,” says Tyler. “Growing up in Utah, everyone has the same mentality. Seeing how many good people there really are out there has been eye-opening. We sleep on the floors of fans we met that night.”

At the same time, Henderson has learned to co-exist in his own world, returning to his wife, while still being able to follow those dreams that keep coming to him.

“Yeah, there are ‘27 Ways’ to get out of town today,” he jokes. “The hardest part is choosing one of them. There are so many things you can do to get out of bed in the morning…but there are times you just want to stay under the covers all day.”

With the way Desert Noises’ career is progressing, that doesn’t seem to be an option.

“I want to know what it’s like/to light this thing on fire,” sings Henderson in “Mice in the Kitchen.”

Sure sounds like Desert Noises have done just that on 27 Ways.

If you like: The Lonely Wild, Peter Wolf Crier, Water Liars, The Last Bison