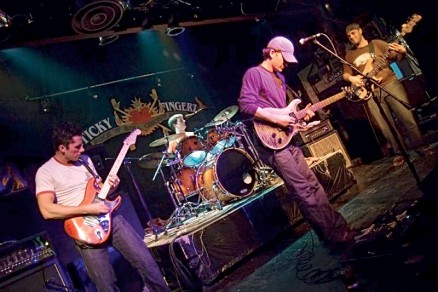 Cooper’s Orbit is the result of four people who have played in various succesful bands in Arkansas for the last fourteen years. We were all born and raised in Little Rock and have been writing/playing together for over eleven years. Our original music is a fusion of melodic guitar-driven rock, layered with elements of pop, jazz, and funk. Throughout our versatile upbringings, we have developed a strong sense of improvisation that reflects influences from bands such as DMB, Umphrey’s Mcgee, Moe., and Phish, and also a strong sense of rock from bands such as Tool and Incubus. We always push the limit while challenging ourselves with new material and writing styles for our music, while all the time trying keep it fresh and interesting for the avid, and critical, music listeners. We recently won the Arkansas Times Battle of the Bands. The last time we entered this was at age sixteen, and we became the youngest group in the competition’s history to make the finals. After co-headlining Riverfest, the largest music festival in the state, and playing to over 6,000 people we are ready to move forward. We will be in the studio soon recording our first full length album, and begin plans for a summer tour. Cooper’s Orbit has had the honor of sharing the stage with such acts as: Blues Traveler, Moe., Tim Reynolds, Smash Mouth, and the Spin Doctors