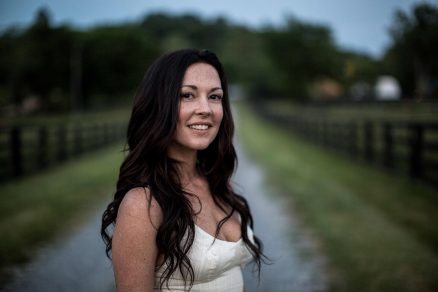 Amanda Shires is not an entertainer. She isn’t looking to help listeners escape their everyday lives or soundtrack celebrations. She isn’t reaching for celebrity, and she isn’t concerned with cultivating a personal brand. She is an artist in the true sense of the word, meaning she creates because she has a real need for the process of creating. That is not to say that the songs on My Piece Of Land aren’t entertaining, but that quality is a by-product. The real intention here is to relate.

Ms. Shires began her career as a teenager playing fiddle with the Texas Playboys. Since then, she’s toured and recorded with John Prine, Billy Joe Shaver, Todd Snider, Justin Townes Earle, Shovels & Rope, and most recently her husband Jason Isbell. Along the way she’s made three solo albums, each serving to document a particular period in her life while improving on the perceptive qualities of the previous record.

The songs on My Piece Of Land deal with family, with anxiety, with the phases of one young woman’s life; but the primary focus of My Piece Of Land is the concept of home. Ms. Shires addresses the similarities and differences between the home she was born into, the two homes she was eventually split between, and the home she has finally made for herself. Some of these stories are from the creator’s point of view and some most certainly are not. You’d be hard-pressed to identify which is which, though, considering the level of empathy involved in the creation of these stories. “The concept of home, like the concept of love, is more complex than it seems,” says Ms. Shires. “You start out with this inherited idea of home, but as you grow you realize that’s only a suggestion. You have to use that along with all the little pieces of wisdom you’ve picked up along the way to finally build your own place in the world.” Ms. Shires sometimes describes songwriting as “solving the puzzles,” but before the songwriter even begins to arrange rhymes and melodies, she must first be acquainted with the complicated workings of the heart.

Most of this album was written after Ms. Shires had reached the seven-month point in a summertime pregnancy, and was no longer able to travel. For a woman used to touring most of the year, being stuck inside brought challenges and offered creative rewards. “Pregnancy does weird things to you,” Amanda says. “You walk around holding your arms over your belly, sometimes almost overcome by anxiety. I constantly wondered if I would be able to protect this child, if my marriage would last forever, if I’d learned enough about the world to be a good mother. At the same time, you’re so excited, so hopeful, and so severely physically limited.” About how the setting affected the finished product, she says “This record turned out to be a personal record, set in our home where I had lots of time for reflection and time to face my concerns and

fears.” The listener can hear Ms. Shires unpacking those anxieties in a song like “Slippin,’” with its ruminations on what could go wrong in a relationship that seems stable.

There’ll be a trigger, then up starts the fire, a handful of matches some faulty wiring.
You’ll say you have this hollow feeling. Something’s always been missing. Tonight could be the night you go slippin’ away from me.

Her piece of land is one with a panoramic view, and she pays close attention to even the smallest details. Take, for instance, the first stanza of “Harmless.”

A phased golden light rained down from the streetlight. It fell across your shoulder, paused just above your collar.

With this description of one fleeting moment, the writer sets an entire scene. Ms. Shires would argue that the term “poet” should not be used to mean “unusually perceptive songwriter,” since the roles of modern songwriter and poet are so very different. However, it isn’t hard to understand how her post-graduate education in poetry helps Ms. Shires choose which details to include. “It’s all about precision. My time in the MFA (Master Of Fine Arts) program at Sewanee taught me a lot about different ways of writing and how they all have one thing in common: the better you are at editing, the better your work will be. Spending long hours workshopping poems and reading the classics gave me a solid standard when it came time to edit my songs.”

Ms. Shires recorded My Piece Of Land under the guidance of brilliant Nashville producer Dave Cobb at his Low Country Sound studio. Inviting Cobb to produce My Piece Of Land was an easy decision to make, considering Ms. Shires had worked with him before on Jason Isbell’s albums Southeastern and Something More Than Free. Ms. Shires knew of Dave’s propensity toward arranging the songs in-studio, rather than rehearsing or making demos beforehand. Cobb believes in the spontaneity of early takes, and with the proficient rhythm section of Paul Slivka and Paul Griffith, the studio band was able to record the album in a relatively short amount of time without sacrificing performance quality. This approach gives each song on the album emotional urgency along with a groove that’s loose and effortless.

Among other things, “Pale Fire” is about consciously shifting one’s own priorities. There are two types of lovers: the kind we need and the kind we want. The hard part is finding someone who represents both. “You Are My Home” is written as a gift, a token of appreciation to someone who has helped the narrator define her place in the world. “Mineral Wells” is a song Ms. Shires wrote many years ago, after relocating to Nashville from her childhood home in Texas. It speaks to the part of us that never really leaves that original homeplace.

With My Piece Of Land, you get the sense that Amanda Shires has reached a personal pinnacle. This album is the creative milestone suited to accompany the recent milestones in her life: becoming a mother, developing into a true artist, and finally finding a home.